In accordance with the NBFC constitution, all Committee members will stand down at the AGM and the following positions will be declared vacant:

Any eligible member (players, Life Members, Beach Club Members) wishing to nominate for any of these positions may do so in writing prior to the meeting.

All nominations are to be sent to:
secretary@nbfc.com.au.

Nominations can also be made at the AGM

Under the club’s constitution, all nominations are to be seconded at the AGM.

If there is only one nomination for vacant positions, the nomination needs to be carried by a majority of members attending the meeting.

If there is more than one nomination, a vote will be held at the meeting

No fooling the Beach 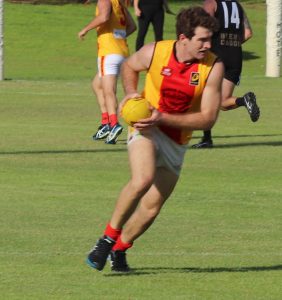 Alex Coleman….has been a strong influence in the Hybrid Linings C5-Grade.

It was renowned author Stephen King who penned then saying ‘fool me once, shame on you. Fool me twice, shame on me.’

Hybrid Linings C5-Grade coach Glen Hinkley might well have reminded his charges of that mantra as they prepared to play Wanneroo at Wanneroo Showgrounds on Saturday.

When the two teams confronted each other earlier in the season at Charles Riley Reserve, the undefeated Beach might have been looking for a percentage boost. Mentally, they had ticked it off as a soft kill before going into battle.

What they got was a fair dinkum contest with the bottom-of-the-table Roos and it wasn’t until the last quarter that they shook free to win a tight struggle.

There was no chance that was going to happen in the return bout last Saturday.

In the previous fortnight the Roos had beaten University and Curtin-Wesley and had added some talent to significantly add to their depth.

But the Beach responded, playing some of their best football of the season and despite the greasy and muddy conditions, they were simply too classy and too skilful for their respective opponents – winning by 107 points – 21.9 (135) to 3.10 (28).

It all started in the middle where Nick Marsh and David Purser reaped the benefits of Alex Coleman’s tap work and won clearances at will. On the wing, Nick Wells was a class above with his skills and the forwards feasted on these clearances and elite delivery.

Mason Rollo played his best game at the level, kicking four goals but also showing his defensive attributes, and down back, Ben Litchfield controlled the area and continually rebounded any Wanneroo forward sorties.

The Beast Carpet Cleaning C5-Reserves imposed their will on the game from the outset and in another commanding display won 25.15 (165) to 1.1 (7).

Obviously with a scoreline of that nature they won every position on the ground, with Jack Stevens outstanding, and both Tully Wickstein and Sam Zehnder cashing in on the opportunities in the front half, kicking 12 goals between them.

Experienced midfielder Joel Brown and key defender Liam Vardy were also pivotal along with rebounding half-back Dan Ryan who continues to build with every game after missing a big chunk of footy with a knee injury.

Significantly, though, some emerging players continue to impact including Reef Samuels, Jayden Hunt and Isaac Seidner.

Some clubs have been known to stack teams at this level, but the domination of this team is a reflection of the club’s remarkable depth.

The Indian Ocean Hotel Brett Jones Colts also faced Wanneroo, but at Beach headquarters, and their match followed a similar trend as they gave rookie coach Darcy Sparks his first victory at the helm.

They exploded out of the blocks with seven goals in the opening term, including three from red-hot forward George Gasiorowski, to put the result beyond doubt at quarter-time.

While the Beach continued to work for opportunities, the goals became tougher to found but they ran out strong winners 10.14 (74) to 6.4 (40).

Lachie McLeod was outstanding in the midfield in concert with Campbell Francheshi and Ben Tindall while Gasiorowski and George Mortimer were damaging up forward.

The Beyond Tools E2-Grade almost assured themselves of a top three finish with an outstanding performance against Melville at Beach HQ.

A 103-point victory – 17.12 (114) to 0.3 (3) – has seen the Beach outfit create a two-game gap on the chasing pack and that triumph was based around a powerful first half that demoralised the opposition.

Michael Collins and Callan Dunjey were in control throughout while Fletcher Cooke maintained his high standards, while Jacob Willis, Vaughan Quinlan and Daniel Njegich wielded a strong influence.

The GJ Osplumb E3-Grade produced a competitive effort against Ballajura, but could not match their depth.

A highlight of the day was an exciting victory for the Grange Residential Integrated Rules who overcame Kelmscott Bulldogs at John Dunn Oval with a sizzling display.

Unfortunately, for both the Project Ceilings A-Grade Women and the Peak Body Fitness C4-Grade Women, they ran into opposition teams who were at the peak of their powers and they were well beaten.

That did not dampen the enthusiasm for ladies day, however, which was again a highlight. 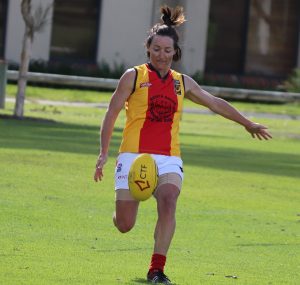 As the Perth Football League celebrates its centenary in 2021, it is difficult to imagine anything more demonstrative of its evolution than a match that will take place tomorrow night.

North Beach – and one individual in particular – will be in the middle of it.

For the first time in the storied history of the community football’s premier competition, a State Women’s team has been selected. And feisty North Beach on-baller Clare Dickson is a central figure in the team.

Not only will she play in the game against a WA Country Football League team, she has been named captain of a team that will be coached by 2006 West Coast Eagles premiership star Beau Waters.

Dickson, in her first season at the club, has been an outstanding asset for the women’s program. A natural leader, she has provided great guidance both on and off field, taking on coaching duties to complement her on-field contribution.

To be the inaugural WA women’s captain in the 100th year of the WA Amateur Football League, in the first representative match, is something extremely special.

She will lead her team into battle at Fremantle Community Bank Oval at 6.10pm, with this clash followed by the men’s match – featuring Hamish Coulton and Dylan Brockbernd. 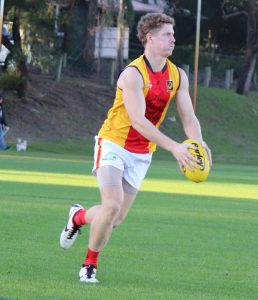 Hamish Coulton…has slotted in nicely in his first season at the club.

Two new arrivals  at North Beach have earned the opportunity to represent the State in the annual WA Amateur Football League clash with the WA Country Football League at Fremantle  Community Bank Oval on Friday night.

Defender Hamish Coulton, who has played every game in the O’Rourke Realty A-Grade team that has lost just one game, and young midfielder Dylan Brockbernd, who has been impressive. He missed a few games after having surgery on a broken nose, but has been clean and creative.

Coulton is rarely beaten in one-on-one contests and has looked completely at home despite having played most of his football as a forward before heading to the Beach.

Both have immersed themselves in the club culture and the North Beach faithful will follow their exploits closely in the match starting at 7.45pm. 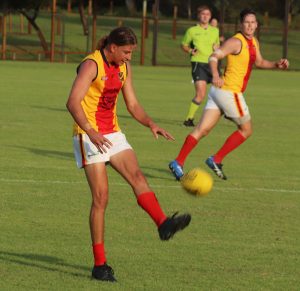 Oskar Tothill…outstanding in the ruck against Scarborough.

Matches against Scarborough always have a little extra riding on them.

The proximity of the two home grounds, being just a few kilometres apart, means there is always going to be an edge to the local derby.

Last Saturday at Millington Reserve was no exception and the O’Rourke Realty North Beach A-Grade outfit responded with perhaps their most complete performance of a season in which they have, to date, lost just one match.

With the added incentive of being able to make it tough for the reigning premiers to qualify for finals, the Beach asserted their ascendancy early and were ruthless on the way to a 18.8 (126) to 7.8 (50).

And then the class of Nic Reid and James Garcia ensured maximum pain was inflicted on the Sea Eagles, Reid kicking seven goals and Garcia converting four.

The defence was also solid, led by the ultra-consistent Christian Bottechia and Dan Leishman.

The Lifenet A-Reserves also carried too much fire-power for the Sea Eagles, maintaining their unbeaten record with a 12.8 (80) to 2.6 (18) victory.

Again the tone was set early through the likes of ruckman Josh Chapman and the experienced midfield group of Adam Swain, Nic Bowe and Beau Witheridge while Tim Edwards, who has had an exceptional season, was a game-breaker with an abundance of possession and four goals.

Chris Wells continues his strong development and Matt Raynor maintained pressure for a place in the A-Grade team as the senior squad prepares for a week off for the scheduled bye to allow for Friday’s State game at Community Bank Oval in Fremantle.

The Plasterwise Phil Scott Colts were involved in the most absorbing match of the day and managed to recover from a slow start.

After conceding four goals in the opening term, the Beach held Scarborough to just one more for the match in winning 8.8 (56) to 5.5 (35).

Kobi Martin and Justin Prior, who have set strong standards throughout the season, against set a high benchmark while Cody Sawyer kicked three goals and in conjunction with Riley Sparks provided plenty of headaches for the Sea Eagles’ defence.

No flag, but still a big pot 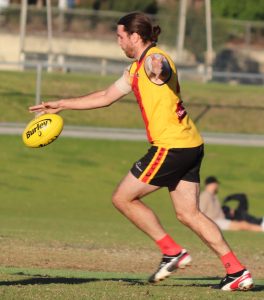 Christian Bottechia…has been in solid form at half-back for the O’Rourke Realty A-Grade.

Tomorrow at Millington Reserve the two clubs will lock horns once more and while the stakes are nowhere near as high, there is still be a big pot in the middle of the table to be won.

The Beach needs to win to ensure they stay at the top of the premiership table while the Sea Eagles must win to remain in the race for finals. Scarborough are currently two games adrift of fifth placed CBC Fremantle, whose upset victory over North Beach hurt both clubs last week.

Scarborough also lost to another team in the top five, Kingsway, who now sit in fourth place.

While the Beach’s traditional rivals and neighbours are in eighth place this match promises to be an intriguing battle, with consequences for both clubs.

Curtin University-Wesley, a game behind the Beach but with a superior percentage, will host North Fremantle at South Oval. North Fremantle sit behind both Wesley and Kingsway, just a game adrift in sixth position.

So, in the run home every game is likely to have consequences for the clubs fighting to be a part of the post-season activity

The Beach will also have important matches in the Lifenet A-Reserves and the Plasterwise Phil Scott Colts, while the Hybrid Linings C5-Grade and Beast Carpet Cleaning C5-Reserves will play Wanneroo at Wanneroo.

With the Project Ceilings A-Grade women playing at Piara Waters and the Grange Residential Integrated Rules off to Kelmscott there are only four matches at Charles Riley.

The Peak Body Fitness C4-Grade women open proceedings at 9.30am, followed by the Indian Ocean Hotel Brett Jones Colts, the Beyond Tools E3-Grade and the GJ Osplumb E2-Grade will feature at club headquarters.

The good news for the fifth and sixth grade teams is that they will have an audience larger than normal as ladies day – postponed two weeks ago because of the COVID lock-down – will kick to life in the afternoon.