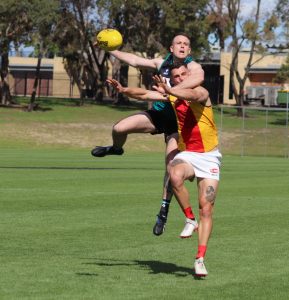 Nic Reid in a hot contest against Kingsway.

If there is one wish a team going into a cut-throat final has at the forefront of the collective mind, it is to play at their optimum. To take their best into a game and force the opposition to play better to get past them.

That wish was not granted for the O’Rourke Realty A-Grade when they played Kingsway in a preliminary fin al at Kingsway Reserve last Saturday.

The effort could not be questioned, they went down swinging, but just couldn’t quite move through the gears to find top range. In a dour, scrappy affair where goal-front inaccuracy was a by-product of clunky ball movement, the Beach posted 4.15 (39) to exit when Kingsway kicked 6.9 (45).

The Beach had opportunities and dominated for long periods, but found converting those chances proved difficult on a day when a flukey breeze swept across the ground.

After Kingsway controlled the first 15 minutes of the game, North Beach wrested back control and on balance had greater ascendancy, but 3.11 in the second and third quarters left Kingsway in the contest.

At three-quarter time scores were level – 3.13 to 4.7 – and again North Beach owned territory and possession but could not create scoreboard pressure. The Roos pushed forward and kicked the first goal of the term and while the Beached pressed hard, goals remained elusive.

The arm wrestle continued and the Beach were a goal down with a few minutes to play before skipper Mitch Dwyer produced an amazing courageous and inspiring act. Running with the flight of the ball through the centre square.

His eyes never deviated off the football and was cleaned up by an opponent coming the opposite direction. After that bone rattler, having spent a few seconds on his haunches sucking in deep breaths of recovery, amazingly Dwyer got to his feet to contest the ensuing stoppage.

Remarkably, he read the ball off that contest before wearing another tackle.

Having sat on top of the table for so much of the season it was a shattering defeat that sees the A-Grade outfit looking on at tomorrow’s grand final.

While it did not go according to plan, there were a number of strong performances including that from defenders Christian Bottechia and Daniel Leishman, young midfielders Dylan Brockbernd and Lachlan Scurria and forward Nic Reid, who kicked three of the team’s four goals.

Meanwhile at nearby Richard Guelfi Reserve, the Beyond Tools E2-Grade suffered a heart-breaking Grand Final loss to Lynwood-Ferndale, the game swinging on a couple of umpiring decisions.

At half time the Beach remained in the contest, but fell away after the main break and it was a disappointing end to the season. 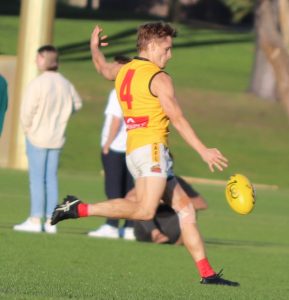 Captain Mitch Dwyer led from the front, but it wasn’t enough to get over the line.

It was a bitter-sweet day for the North Beach Football Club last Saturday.

Bitter in the sense that the season ended for both the club’s colts teams and that the O’Rourke Realty A-Grade outfit lost a qualifying final, but at least the seniors live to fight another day.

The A-Grade match, which saw the Beach tackle third-placed Kingsway at Charles Riley Reserve, presented an opportunity for them to advance to the second semi-final, but they found Kingsway to be a little too clean and efficient on the day.

It was the second time this season the Roos proved a little too slick for North Beach, winning 14.5 (89) to 11.13 (79). While it would be too simple suggest the result was determined by goal-front (in)accuracy, it was a factor.

The Beach had more of the ball inside their forward half, but did not make the most of their opportunities while Kingsway, conversely, were deadly in front of goal. They also managed to cut the forward 50, with the majority of their entries being in a position where they were highly probable to convert.

Beach skipper Mitch Dwyer and ruckman Mitch Mackenzie were outstanding, but there were a lot of North Beach players who fell short of their own expectations.

Christian Bottechia was solid across half-back, Nic Reid kicked three goals and was the most threatening forward while Ned Halley and Dan Leishman also tried all they could to propel their team over the line.

The Beach now plays University in a sudden-death first semi-final against University at Charles Riley Reserve.

The Plasterwise Phil Scott Colts had a rough finish to the season, playing the best teams in the competition over the last month of the qualifying rounds before running into Curtin University-Wesley in the elimination final.

The Beach boys were just marginally short of the pace-setters in the competition, but took the game right up to Curtin before the opposition edged clear to win 10.6 (66) to 7.6 (48).

As has been the case in recent years, a younger North Beach team ran into a mature opponent, but players like Justin Prior, Matt Coleman and Nathan Perry, who set high standards throughout the season, continued to will their team across the line.

Chris Papadopoulos, Kobi Martin and Jason Rocke, others who had outstanding seasons, sustained that form despite the outcome.

The Indian Ocean Hotel Brett Jones Colts, who had been exemplary from in the six weeks leading into the finals, found Swan Athletic a little too strong in the first semi-final, reversing the result from a fortnight earlier.

George Mortimer was lively up forward and Rhys Irvine was also solid, but Swan Ath had all the answers.

Intensity soars in race to finals 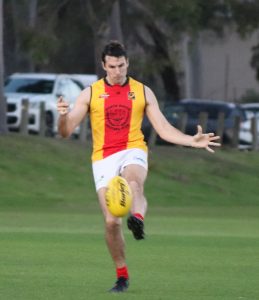 Officially the Perth Football League finals series starts in about a month from now.

In reality, it starts tomorrow for the O’Rourke Realty A-Grade team – and others – as they step up the intensity in the quest for success.

Wonderful platforms have been laid by many of the club’s teams, but now the focus begins to sharpen with the A-Grade team playing three finals rivals over the next three weeks, starting with the challenge of confronting Kingsway at Kingsway Reserve (please note the 1.10pm start).

There’s not much point looking any further ahead than this match, but in ensuing weeks the Beach will also play Trinity Aquinas and University, two accomplished sides in the mix for A-Grade honours.

Kingsway currently sit in third position, but it is something of a concertina between third and sixth, with three clubs – Kingsway, Fremantle CBC and University  – all sitting on seven wins, with Trinity Aquinas nipping at their heels one game back.

So we can expect Kingsway to play with great intensity with so much on the line.

Not that North Beach does not have a little skin in the game too, needing to win to ensure they maintain top position on the table and the chance to secure a break at the end of the qualifying rounds and a home second semi-final.

The Lifenet A-Reserves are virtually guaranteed top spot, with a two-game cushion and a healthy percentage advantage over Curtin University-Wesley.

The Plasterwise Phil Scott Colts are also in a tight race for positions within the eight and can expect a tough contest with Kingsway while the Indian Ocean Hotel Brett Jones Colts face a match-up with potential elimination final rivals Collegians.

Victory for them is imperative to meet their designs on pushing higher up the table in the closing weeks.

The Hybrid Linings C5-Grade and the Beast Carpet Cleaning C5-Reserves are both unbeaten, but will start to fine tune their methodology against North Fremantle at Gil Fraser Reserve.

The Maggies are always a challenge particularly on their home deck and after three lop-sided rounds, where 100 point victories were racked up, the third and fourth grade teams will see no harm in locking horns with a far more competitive foe.

The GJ Osplumb E2-Grade are sitting in third spot and   have the chance to consolidate when they host Kingsley at Charles Riley Reserve.

The Project Ceilings A-Grade women have made strong ground over the course of the season and will be looking to finish the season powerfully, starting with a home game at Charles Riley Reserve against Nollamara.

Hall of Fame on August 14 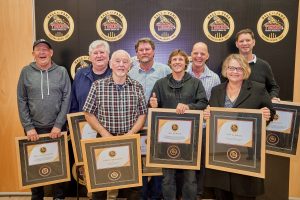 The 57-year history of the North Beach Football Club has been carved by some wonderfully devoted and passionate people, both on and off the ground.

Some of those people will be recognised when the second instalment of the Hall of Fame of is presented after the club’s round 17 fixture against University at Charles Riley Reserve on Saturday, August 14.

Again there will be a mix of people, both in a football and off-field sense, who have put the club on the map and contributed significantly towards creating the club we know today.

The function is a non-ticketed event and will start around 6pm, presenting the opportunity for current-day players and members to absorb some insights into the club’s rich history.

The selection panel of David Perry (chairman), John Davies, Greg Webster and Brendan Lynch have had the tough job of refining a long list of worthy candidates, with the final honourees unveiled in a little more than two weeks from now.

You are encouraged to get along to this historical occasion and enjoy poignant stories of the club’s journey. 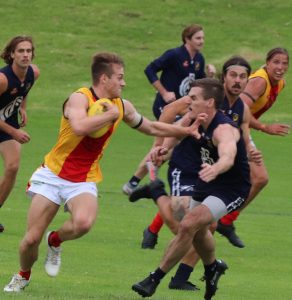 Dylan Brockbernd was one of the youngsters who was strong against Collegians.

It was in the middle of the third quarter on Saturday at Dalkeith Oval and the ball went through the hands of three emerging North Beach players.

Jack McIntosh gathered between half-back and wing, kicked it to Oskar Tothill, who then found Shannon Lucassen. It was the most satisfying aspect of a satisfying day for the O’Rourke Realty A-Grade against Collegians.

There was an expectation the Beach would win, but it was more about how that victory might be achieved. And the performances of those three players, in addition to Lachlan Scurria, Dylan Brockbernd and Matt Murray was as much a reason to be excited as a convincing 70-point win.

All played their role in a victory that was never in doubt, the verve and energy of the Beach – combined with a significant dose of class – saw the ladder leaders maintain their unbeaten record with a 15.16 (106) to 5.6 (36).

A perfectionist might have wanted a bigger margin, more commensurate with the dominance in play, but that would be greedy.

The class came from the likes of experienced campaigners James Garcia, Dan Leishman, Andrew McGuinness, Ned Halley, Kyle Cranley, Ryan Ekert and Nic Reid, but in reality it was a game where virtually every North Beach player won their position.

It was a similar tale in the Lifenet A-Reserves who coasted to a similar victory – 17.9 (111) to 6.4 (40) – as they took greater advantage of scoring opportunities.

Players were thrust into varying roles, but experienced players like Dion Cownie, Tim Edwards and Beau Witheridge through the midfield, Liam Catalfamo across half-back and Nathan Adler and Ben Johnson up forward caused all manner of angst for the Blues.

To be fair, it would be possible to go through the entire team list and suggest each of the North Beach players contributed in a game that was one-sided.

The Plasterwise Phil Scott Colts were expected to confront the biggest challenge and that proved the case as they were out-played by Collegians, particularly in the first half.

There were several mature young men in the Collegians line-up and it didn’t help running into them on a day when the WAFL had a bye. Several fringe Claremont players drifted back, among them Zac Mainwaring, who proved a handful when he kicked a handful of goals.

The Beach, however, chipped away and were far more competitive after the main break with players like Kobi Martin, Justin Prior, Codi Sawyer and Rhys Irvine doing all they could top inspire their teammates.

Strong performances all round 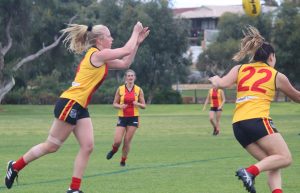