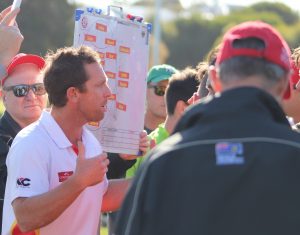 Senior coach Shane Paap will be looking to help the club take the quantum leap from grand finalist to premiers…and it starts next Tuesday.

After a hiatus in spring and the first stage of summer, North Beach is preparing to launch into pre-season training next Tuesday night.

With training sessions for the men’s teams alternating between Karrinyup and Gwelup Reserves, just a few hundred metres from each other, the Beach is looking to build on a 2020 season that saw the club play in both the O’Rourke Realty A-Grade and the Lifenet A-Reserves grand finals.

The A-Grade missed out on the major prize while the A-Reserves won their fourth premiership in succession. A week earlier the Indian Ocean Hotel Brett Jones Colts also won the grand final.

Now it is a matter of building on that platform and moving towards another A-Grade premiership.

All players – young and old, established and those planning to embark on their North Beach experience –are encouraged to be at Karrinyup Reserve next Tuesday, January 5 for a 5.45pm start.

The club is looking for a strong commitment to the 2021 campaign and that starts next week.

Senior coach Shane Paap will continue into his fourth year at the helm, while Scott Holbrook (A-Reserves), John Burton (Colts) and Glen Hinkley will be involved in the 2021 assault along with the likes of Jack Flynn, Hooper and hopefully recently announced life member Novak Smith.

The women’s program will again be led by Dean Logan.