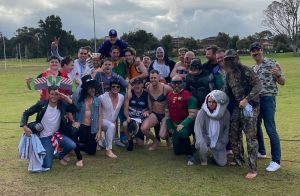 Some of the past players who slipped into the theme of the day.

North Beach made the most of the last round of the Perth Football League qualifying round season in every sense.

Not only did the O’Rourke Realty A-Grade team complete a strong run to this week’s qualifying final, but it also brought together a monster sponsor marquee day, as well as an army of past players and the future of the club, with the junior club and children of current and past players at the forefront.

In addition the Lifenet A-Reserves completed a demolition of Collegians while the Plasterwise Phil Scott Colts, although beaten, had a competitive hit-out against a finals competitor  as they locked in on another tilt at the sharp end of the season.

On-field it was a success, but off-field was even better as all elements of the club came together.

Senior coach Shane Paap was the key driver behind bringing the club’s family together, engaging parents and children and encouraging them to attend while former players Chris Gooch and Matt Dobson continued to build on a fine tradition.

Over recent years, the past players have committed to an icy slide at Charles Riley Reserve – their version of the Big Slide – with players dressing up in costumes and taking a slide into an ice slurry to raise funds for MND.

It was another great success and combined with the sponsors day, championed by the inimitable David “Mini” McLaurin, created an extraordinary vibe on a day that also saw two extraordinary results as the Beyond Tools E2-Grade and Indian Ocean Hotel Brett Jones Colts began their finals assaults.