A game worthy of occasion 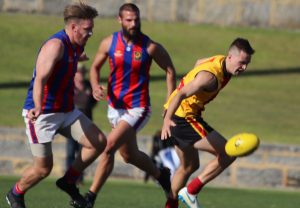 Celebrations of deeds past are a part of the cultural enrichment of a football club. After all, as the maxim asks, how can you know where you are going if you don’t know where you have come from?

In a nod to some outstanding achievements 10, 20 and 30 years ago North Beach hosted reunions at Charles Riley Reserve last Saturday, a large percentage of past players descending on the home facility to reminisce about their historical achievement.

It has not been uncommon in situations of this nature, for those charged with the responsibility of flying the club flag on the field, to be distracted and for the day to be soured by mediocre performances of the current day team.

That situation was averted in the most emphatic fashion possible when the Beach dispensed with Kingsway in all three grades; marking the assembly of greats past in the most appropriate way.

The O’Rourke Realty A-Grade team, looking for a response after an unexpected blip against Wembley seven days earlier, produced a sublime display of team football.

Led by experienced midfielder Dan Leishman, enjoying a stellar run of form, was destructive through the middle of the ground, key forward Ryan Ekert imposed himself on the game, posting four goals, and other experienced warriors Beau Witheridge and Andrew McGuinness (three goals) were prominent in an 85-point romp.

Witheridge was especially keen for a bold display, given he is the last surviving playing member of the 2009 team and he gave his flag teammates a reminder of his class and guile.

While the Beach was never under threat, a nine-goal final term belied the competitive nature of the battle with Kingsway collapsing and waiting for the final siren as the Tigers put on a show.

The Lifenet A-Reserves continued their amazing run in the opening seven rounds of the season, with a fourth victory in excess of 100 points.

Again boasting a team bulging with exciting youngsters yearning for their opportunity in the higher grade, they dominated throughout, before winning 18.18 (126) to 1.1 (7), Kingsway’s solitary goal coming in the opening term.

Key forward Nathan Adler, a central figure in the team’s dominant run of success, has kicked 33 goals in six games, including eight in this. He has 45 goals in total when considering he kicked 12 in the opening game of the season with the Hybrid Linings D1-Grade.

There were many other exceptional performances in the 119-point rout, with Matt Raynor, Brennen Irvine, Nick Bowe, Matt Holden, Nick Baroni, Ben Johnson and Cam Hoskins among those who cashed in.

The Plasterwise Phil Scott Colts set themselves a number of key performance indicators in their clash and doubtless met them all on their way to starting the celebrations in style with a 118-pont dismemberment of Kingsway.

There were winners all over the ground as the colts pieced together an emphatic performance ahead of the bye, a good, confidence-boosting victory to bank in the knowledge that immediately after the break more significant challenges lie.

The Beach focused on better ball usage and decision making going inside forward 50.  Coach John Burton was pleased to see his players taking it onboard, his side kicking 18 goals after they were measured and considered when penetrating the attacking 50 metre arc.

Madoc Plane continued his solid run of form, Jayden Hunt was ubiquitous in the midfield, while Travis Burton, Jack Davidson and Noah Cahill were busy up forward.

Judd Clinch and Jack Merson repelled as required down back, making for an impressive team performance. The Beach will resume against CBC on Saturday week, an intriguing challenge against the second-placed rivals.