A giant leap for C4-Grade 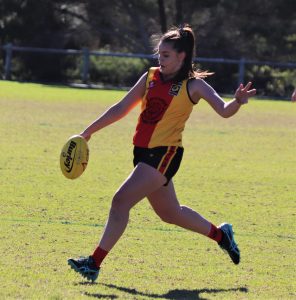 Confucius says that a journey of a thousand miles starts with a single step. For the Peak Body Fitness C4-Grade women it wasn’t exactly the first stride in their expedition, but it was a quantum leap forward.

For the last two seasons the second of the North Beach women’s team has faced on-going adversity, battling for numbers, having multiple players doubling up and playing two games. At times it has been demoralising.

But they have been resilient.

And on Saturday came the reward. It was on the northern oval at Charles Riley Reserve, a couple of hundred spectators there to bear witness to their first win. It might just as well have been the MCG, yellow and red tickertape blasted out of a cannon.

When the siren sounded to herald a momentous two-point victory over Cottesloe, players jumped into the arms of teammates. They did a little jig in the middle of the ground. They belted out the club song in the rooms. The moment was acknowledged as it should have been.

Several weeks ago these women celebrated their first goal with hugs and high fives.

In the absence of coach Hayden Marchetto – who was enjoying the moment his son Kai debuted for Claremont colts – the team was managed by the injured Mel Plant in conjunction with Dean Campbell.

This was an absorbing and entertaining battle, with the Beach brilliantly led by the likes of Jordan Lilford, Taylah McGorlick, Chelsea Edwards, Moanna Roberts, Emily Salle and Kara Elliott.

Additionally, Teegan Davidson was dangerous up forward and kicked both goals in what was a momentous win.

The Project Ceilings A-Grade team followed against the highly rated West Coast and while they succumbed by nine points in the end, the effort again underlined the depth of talent in this female squad.

West Coast are the reigning premiers and sit in second position, out of top place only by percentage, and the Beach led by a goal at half-time.

Kate Shearman was outstanding, Isabell Strover made an auspicious debut and Elysia Burvill was brilliant across half-back. Burvill was impassable as she formed an important brick in the wall that locked the ball in the Beach forward half in the second term.

Others who shone included the tenacious Clare Dickson, Tessa Anderson and Ash Pianto. It was an effort that deserved the ultimate reward, but West Coast proved resolute and won 3.5 (23) to 2.2 (14).