A-Grade season kicks off against TA 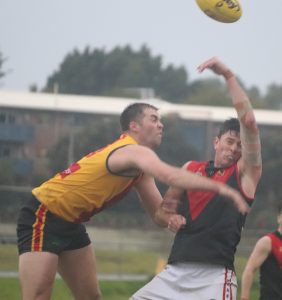 The journey to Bill Grayden Reserve, home of Trinity Aquinas that sits within a pitching wedge of Collier Park Golf Course, can be a daunting one for rival WA Amateur Football Clubs.

It is a unique size and shape, short down the middle, wide on the expanses. It is easy to get trapped into taking the long route to goal, a bit like the SCG.

But traditionally, North Beach handles the venue well. It suits teams that crack in. The Beach is the epitome of teams that relish the contest.

So, as this long-awaited Perth Football league season kicks into life, the O’Rourke Realty A-Grade team is looking forward to its first confrontation of the season against a traditional rival. The two clubs harbour a mutual respect.

For this match, the first in an abbreviated nine-game season, there will be some familiar faces in the North Beach colours, as well as some who return and some who will step out for the first time in senior battle.

Mitch Holbrook, the cornerstone of many successes at the Beach, will return up forward and Craig Hoskins, who played a few years ago, will return and follow in the footsteps of his father Michael, a premiership player in the 1990s.

Fan favourite Sam Lamont, after a season with the West Cast Eagles WAFL team, also returns with the Eagles no longer able to field a team in that competition because of AFL protocols.

James Garcia, a product from Sorrento-Duncraig who enjoyed a successful time at Subiaco, also will play for the Beach while Madoc Plane, an impressive performer and captain of the Plasterwise Phil Scott Colts team that won last year’s premiership, makes his senior debut.

Former West Coast Eagles midfielder Simon Tunbridge will play his first game for the club in another exciting development after moving into the area.

The Lifenet A-Reserves will beguin their quest for a fourth successive premiership under Scott Holbrook and again look to ooze class.

While the A-Grade teams play south of the river, there is a plethora of entertainment available at home, with six teams playing at Charles Riley Reserve.