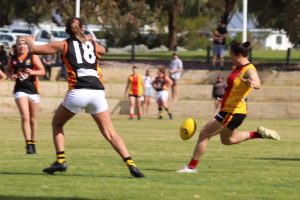 To borrow from an advertising campaign featuring Lara Bingle about a decade ago – and using a little licence to tweak it a teeny bit – the North Beach women could have been excused for asking ‘where the bloody hell is it?’

As the Project Ceilings A-Grade prepared to play Winnacott in their penultimate game of the game of the season, there is no doubt all of them would have plugged the location into the GPS.

The same would have applied to the Peak Body Fitness C3-Grade who played Hills Rangers. All due respect to both opponents, but they are not a familiar foe.

Winnacott, for those unfamiliar, is somewhere south-east of Fremantle, and the journey was worth it as North Beach produced a quality performance that resulted in a 32-point victory – 4.8 (32) to 0.0 (0).

The first half was a little ‘rough’, evidenced by scrappy inside footy and the team getting dragged into a messy style of play.

At the half time break there was a real sense the team was letting itself down. They knew they had to execute their skills to better effect and take risks.

The game turned in the third with the Beach girls playing solid outside footy with a strong focus on second and third options and hitting up targets after finding clear air. The midfield dominated and some key position players like Lexi Lindsay up forward finding some real touch.

Whilst keeping Winnacott scoreless for the whole game the Beach could have hit the scoreboard harder but it  was a solid effort and another example to the playing group of the talent on hand when it all comes together.

Special mentions to Emily Sainty in the ruck who dominated all day without a break. Emily’s field positioning in the second half – essentially sweeping – was a key to the forwards getting multiple options.

Clarissa Power has found her niche down back and the work rate of Tessa Anderson and Olivia Hongell was faultless. Olivia played on the wing and excelled.

Hills Rangers are in the Shire of Mundaring, a relatively young club spawned from the merger of clubs in the area, and they had strong numbers in the C3 division.

They overwhelmed the Beach, as they have against all opposition this season, winning 15.14 (104) to no score. An indication of their dominance is that their percentage sits above 1200.

It was a tough day for the fledgling Beach team, but they never stopped trying.