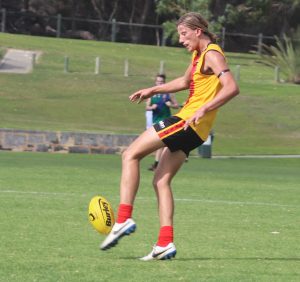 Oskar Tothill…an emerging player who was central to the Lifenet A-Reserves win.

All season the Lifenet A-Reserves were the best team in the competition.

Just one loss in 18 qualifying games – by a few points against Fremantle CBC deep into the season – saw them finish comfortably at the top of the table.

But home and away form brings with it no guarantees when we advance into the pointy end of the season. And coach Scott Holbrook and his team was aware of it as they faced off with University in last week’s second semi-final.

The Scholars boast great depth across all grades, at similar levels to that of the Beach. They are well drilled, highly skilled and are always competitive.

So the Beach knew what to expect, particularly in a high stakes game where the reward was a spot in the grand final.

Many of the players in this North Beach combination have been there before and drew on that experience to absorb the early pressure from University before lifting the tempo in the second term to create a match-winning break.

After an even opening stanza the Beach surged in the second quarter, kicking five goals, to establish a four-goal advantage, which was basically the final margin as they won 10.4 (64) to 6.6 (42).

While they might have broken the game open in that breath-taking 20 minute burst, University maintained their intensity and there was no opportunity to relax.

The Beach had important contributors all over the ground and a pleasing aspect was the efforts of some of the younger players including Oskar Tothill, Nathan Adler, who kicked four goals, Ben Johnson and Nathan Torre.

The Plasterwise Phil Scott colts also showed pleasing resolve to advance to the preliminary final after eclipsing Wanneroo by 25 points – 8.5 (53) to 4.4 (28).

The Beach managed to reverse the result of the final qualifying game of the season standing resolute in a sometimes physical contest to advance. They will now play a common foe, University, in the preliminary final.

Against the Roos, who had advanced from outside the top five courtesy of their last round victory against the Beach, to qualify for the first semi-final and the Beach had filed away some lessons from the round 18 loss.

They were committed and strong, established an early advantage and never relinquished their grip on the game.

Madoc Plane was again a benchmark through the midfield while Luke Hopkins helped to co-ordinate the defensive effort and key forwards Caiden Eaton and Ben Wasley were a constant threat when the Beach pushed forward.