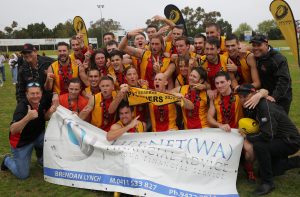 The defensive effort in finals football is so often the cornerstone of success.

There has been no better example of it than last Saturday at Steel Blue Oval when the North Beach Lifenet A-Reserves won their fourth consecutive premiership.

Clinging to a 15-point advantage at three-quarter time – and with Curtin University-Wesley kicking with the aid of a strong breeze – the Beach needed to make it a grind. A game of repeat stoppages.

After losing to Wesley in the second semi-final by nine goals, the Beach produced a stunning performance to win their fourth flag in succession from five consecutive A-Reserves appearances under coach Scott Holbrook.

While the archetypal defensive performance in the gripping final term completed the triumph, victory was set up by a wonderful third term. They don’t call it the premiership quarter without justification.

In wet, soggy conditions on a Bassendean surface that was already water-logged, the Beach kicked half of their score in that 18 minute period.

The experience of defenders Jarrod Chapman and Ben Sweeny was important down back as they repelled countless opposition attacking thrusts in a desperate last quarter, while Matt Murray continued his good form and Adam Swain was also an important contributor.

Poignantly, Sweeny had the ball in his hands, after Wesley had scrambled a late behind, and was preparing to bring the ball back into play when the siren sounded on what was a remarkable performance.

It was seen as a good omen for the day as the O’Rourke Realty A-Grade outfit targeted a similar reward, but unfortunately the good vibe was not continued for the major game.