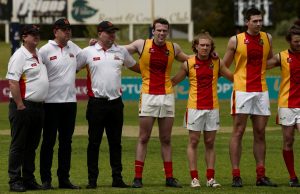 The toughest call coaches at any level have to make is the one informing an individual they won’t be taking the field in a Grand Final.

There is no easy way to deliver that message. It is gut-wrenching no matter how many times you’ve had to do it.

Last night at Charles Riley Reserve Lifenet A-Reserves coach Scott Holbrook and his cohort sat down to select the team for tomorrow’s Grand Final against Curtin University-Wesley at Steel Blue Oval. You didn’t need to be sitting around the white board to understand the depth of that discussion.

They knew that no matter how hard they tried, 25 simply would not go into the 22 positions available.

This situation is not foreign to Holbrook. He has guided his team to the last six Grand Finals at this level, winning four in succession. There are always players who are desperately unlucky and informing a couple of loyal soldiers they had not made the cut, carried with it a heavy burden and an equally heavy heart.

Football is an emotional game and personal connection within the group is generally the cornerstone of success. Without unity it is rare to triumph and it has been a key to this team over several years.

Of course, they will come together as one tomorrow unified in their quest to achieve a rare feat of five on the trot. That would be some accomplishment, given the seasonal turn-over of players.

There are the stalwarts who are old hands at this premiership caper – the likes of captain Nic Bowe, defender Ben Sweeny, midfielders Tim Edwards, Adam Swain, powerhouse Jarrod Chapman and forwards Jordan Webster and Ben Johnson – but there are also a few “newbies’ in this line-up.

Shannon Lucassen, a pacy and talented young wingman who had a taste of senior football this year is still in his teens, Kade McKenzie and James Canty are also new to the club this year while Jack Merson, Jackson Martino, Caolan O’Connell and Matt Raynor have risen from the colts.

This an exciting group that has further under-pinned the unprecedented and unmatched depth at the club.

They play in a Grand Final a week after the Hybrid Linings C5-Grade and the Beast Carpet Cleaning C5-Reserves claimed premierships. Sadly, the fifth grade could not mirror the success and were denied a flag last Saturday.

The O’Rourke Realty A-Grade were also within a kick of being on the main stage tomorrow, but alas they couldn’t find their best at the clutch moments.

The A-Reserves were unbeaten through the course of the season and then crushed Wesley convincingly in the second semi-final. They understand better than most that what has gone before is meaningless because 12 months ago they suffered a horrible belting from the same opponent in the second  semi-final. Fourteen days later they claimed an unlikely triumph with a remarkable form reversal.

The club will be broadly represented around Bassendean tomorrow, bringing their voices as North Beach searches for a classical last hurrah to the 2021 campaign.