A special moment in history 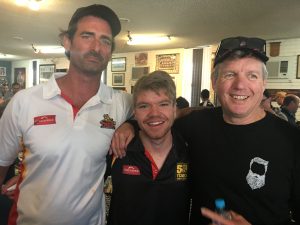 Something special was being celebrated at North Beach headquarters on Saturday – the A-Grade triumphs of 1989, 1999 and 2009.

Revered icons of the football club came together to reminisce and reflect on achieving the ultimate the game offers at amateur level. They could wander through the social room and glance at the frames on the walls commemorating their marvellous achievements.

At Steel Blue Oval, about 20 kilometres to the east of Charles Riley Reserve, another event of great significance had unfolded earlier that day.

To those who represented the Grange Residential I-Grade team, the support network around them and coach Peter Panagopoulos, the emotion generated in 60 minutes of football matched the ecstasy of grand final glory.

They chalked up their first ever win. They sang the club song for the first time. They broke new ground.

Chests puffed out proudly. Tears welled in the eyes of their nearest and dearest , then trickled down cheeks. This was a moment. An unforgettable moment. A reminder of what this club represents. Of what it stands for.

For this team, many of whom came together three years ago and trained as a group of six or seven because they did not have the numbers to enter the Perth Football League, this was momentous.

After a year of training in their playing guernseys because they would not wear them competitively; a year of acceptance, exemplified by their relationship with the North Beach Junior Football Club Year 12 side, when they completed each session with a joint skill drill, the word began to spread.

And last year, they played competitively for the first time.

On occasions they had enough to field a team in their own right, but often called on the opposition to send a few players across to even out the numbers.

And then it continued to build, to the point where this year numbers were strong enough for North Beach I-Grade to stand alone.

They had been building towards this victory, gradually closing the gap between clubs that had been operating for four or five years before them. Wembley is another of the newer teams and last year they tasted victory for the first time when they beat North Beach.

On Saturday, the result was flipped. Wembley still remembered that feeling and could identify with the sense of fulfilment coursing through the veins of the Tiger faithful.

It must be said that this competition is not about winning and losing. It is about opportunity, unity and, most of all, belonging. The sense of fair play, empathy and warmth within the team and for their opponents is unique.

For want of a better term players in this competition are labelled as those with special needs. In truth, they are just special.