A step back in time: North Beach rewrites history in ’08 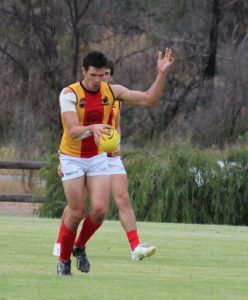 That triumph, in a wonderful showcase of amateur football, saw the Tigers claim their fifth successive A-grade title, the first time any club in the illustrious history of this competition has achieved such a feat.

It is also the eighth time in a decade that the Bill Duckworth-coached outfit has claimed the competition’s ultimate prize.

North Beach needed a bright start against North Fremantle, who went in as firm favourites after dispensing with the Tigers in the second semi-final at Gil Fraser Reserve a fortnight earlier and earning a week’s respite.

The Tigers came out snarling and took the early advantage with Josh McGinnity lively across half-forward and with tall targets, Joe Boys and Mitch Holbrook proving a headache for the Magpies defence.

Holbrook finished with four goals for the game, an outstanding effort considering he was in some doubt with the imminent arrival of his first child.

The ploy of the stretching the North Fremantle defence proved an early ace with Boys kicking two first-quarter goals as the Beach opened up a handy 10-point quarter-time advantage.

North Fremantle, as expected, responded in the second quarter, controlled play and with Michael Minervini and Cameron Hall doing some good work up forward, established an 11-point half-time lead.

The Tigers needed something special and veteran Chris Perkin provided it after half-time. The versatile utility player, who has played in all of the premierships in the last 10 years, added some ferocity to the team’s forward structure and provided the necessary lift.

Simon Pearce and Boys had done well in the ruck all day and the Beach started to capitalise on that advantage to win the clearances. At the last change, North Beach had produced a four-goal swing to take a two-goal lead. The skills were clean, the conversion of opportunities first class and scoreboard pressure was consistently applied.

It was a handy lead, but far from a match-winning break and the Magpies came again, kicking the first two goals of the final term to lock up the game.

North Beach’s vast grand final experience was summoned as the team remained composed with every player making a valuable contribution to the cause. In the end, the Tigers answered the North Fremantle challenge and won a memorable encounter – 13.6 (84) to 11.11 (77).