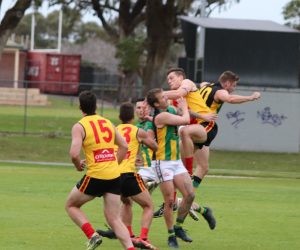 Ladder positions will be ignored when the O’Rourke Realty A-Grade plays University in what looms as a pivotal fixture at Charles Riley Reserve tomorrow.

While the Beach sits at the top of the table – on equal points with Fremantle CBC and Curtin University-Wesley – having lost just one game and the Scholars are eighth, it means nought going into this battle.

Over the last decade University has been the most successful team in the competition and they are just one win outside of the top four with three games remaining. With so much at stake – and so much talent at their disposal – the reigning premiers always command respect.

Having said that, North Beach has been as impressive as any team in the competition in this truncated season that has been reduced to nine qualifying games and a top four finals series.

It seems like we have only just got started and finals are on the horizon.

Obviously a top two finish becomes even more important under the traditional Page System (top four) that operated for so many years when the WAFL had eight teams competing.

Again coach Shane Paap will be anxious to set the tone early, with senior players expected to establish the example. That has been the case throughout the opening two-thirds of the season with Dan Leishman, Adam Cockie, Blake Piggott and James Garcia showing the way.

In addition young, emerging players like Joe Deegan and Liam Catalfamo are doing their bit while Kyle Cranley has been exceptional in the ruck and Ryan Ekert has provided a Focal point up forward.

Simon Tunbridge, Luke Symonds and Ned Halley have also been instrumental in holding the opposition to manageable scores.

On a day when the club will hold its inaugural Hall of Fame Induction ceremony, the current crop of players will be keen to impress.

The Lifenet A-Reserves can expect a strong challenge from University.

Sitting undefeated on top of the ladder as they chase a fourth consecutive premiership under Scott Holbrook, there are days when they know they can they can cruise and get the job done. Tomorrow will not be one of them.

University sits in third position having lost one game and with Curtin University and North Fremantle, who have also suffered a lone defeat, join North Beach in the top portion of the ladder, with a clear division to the rest.

The Plasterwise Phil Scott Colts face a crucial game as they look to secure a top four position. It is a compact competition with two games separating eighth and third.

Curtin and Collegians are both undefeated with a congested pack behind them.

The Hybrid Linings C5-Grade and the Coast to Coast Imports C5-Reserves face big challenges against North Fremantle at Gil Fraser Oval as the intensity lifts in the lead-up to finals.

Both clubs will be involved but it’s about jockeying for those top two spots in each grade, so it should make for some enthralling footy.

The Indian Ocean Hotel Brett Jones Colts should get the job done against the Magpies while the Beyond Tools C4-Grade and the GJ Osplumb C4-Reserves face the long drive to Piara Waters.

The Grange Residential Integrated Rules team has the opportunity to play at Steel Blue Oval against Coolbinia. They will have good memories of the ground, the scene of their first ever win.