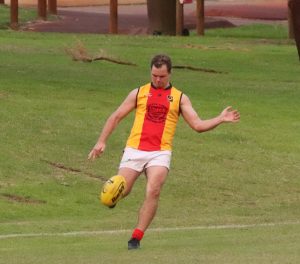 Craig Hoskins…continued his bright start to the season

One of the great challenges in the Perth Football League is confronting Fremantle CBC at Morris Buzzacott Reserve.

It was the assignment that was set for the North Beach O’Rourke Realty A-Grade last Saturday and one which they answered with authority.

The Beach asserted their superiority with a five-goal second term, skipping out to a 29-point advantage and they were never again under serious threat on the way to a 19-point victory – 9.13 (67) to 7.6 (48).

Victory was set up by a dominant midfield led by Mitch Gill and Sam Lamont, while Craig Hoskins also exerted some influence and Kyle Cranley generally gave those players first use.

With the Beach presenting opportunities up forward, the expertise of Ryan Ekert and Nic Reid proved a handful for the CBC defence, kicking five goals between them.

It was a similar story for the Lifenet A-Reserves – playing strongly early in the game to create a gap between themselves and CBC and then maintaining focus to ensure they were never under genuine risk of allowing their grip to slip.

Up by 23 points at half-time, the final margin was 28 in another quality performance that was punctuated by a series of strong individual contributors by both emerging and established stars.

Chris Wells, George McColgan and Matt Raynor were the youngsters who imposed themselves on the game, while Josh and Jarrod Chapman maintained their stellar early season form, Ben Johnson made a noteworthy return and Dion Cownie had an impact through the midfield.

While the two senior teams met their challenge head on, the Plasterwise Phil Scott Colts lost their first game of the season against an accomplished CBC outfit.

Chris Papadopolous, Matthew Coleman and Corey Bellouard were strong contributors for the Beach.