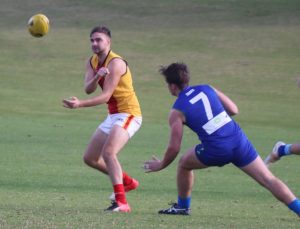 The depth of talent at North Beach was again evident on the weekend, with eight of the nine teams in action all chalking up victories.

The one exception was the Beyond Tools E1-Grade, who played Coolbellup, a club with only one senior team. The Tigers’ fifths were still competitive in that challenging situation and did the Beach proud.

Meanwhile, at MacDonald Reserve, the Hybrid Linings D1-Grade and the Coast to Coast Imports D1-Reserves kept their unblemished records intact with convincing victories against Whitford.

The form of the club’s top four senior teams has been nothing short of spectacular – the only defeat for any of those teams coming in the O’Rourke Realty A-Grade when they were beaten by reigning premiers Scarborough last Saturday week.

That loss was by only 11 points and the Tigers were not without opportunities.

On Saturday, the Hybrid Linings D1-Grade set up victory with a dominant first half in which the Beach scored nine goals to one to set up the victory against a typically physical opponent.

Alex Coleman and Ben De Rosa, in the ruck, gave the midfield first use of the footy and the likes of Jacob Desmond, Matt Power, Josh Tickner and Andy Langsford were appreciating the first class service.

On the wings, Nick Marsh, Craig Hall and Adam Miotti were far too fit and skilful for their opponents and on the few occasions the ball did head into the Whitford forward 50, these men provided the link in getting the ball back in to the North Beach attacking arc.

Once the ball ventured into the Beach’s forward half, Mark Foreman was everywhere and constantly dangerous while emerging key forward George McColgan was again proving a handful for the opposition defenders.

Matt Seaton, changing through the middle, showed terrific defensive qualities and was putting on a tackling masterclass. Tully Wickstein was pacy across the ground and used it to effect in both attack and defence.

Down back, Michael Collins was superb in the air and on the ground. He constantly intercepted Whitford forays and his disposal by foot was immaculate. Liam Pardini continues his fantastic season and Liam Vardy’s experience and aggression were highlights.

The Coast to Coast Imports D1-Reserves were even more dominant, holding Whitford goal-less after quarter-time and kicking 15 themselves on the way to a 121-point demolition.

Sam Cahill was again ubiquitous in attack, kicking four goals, while James Bryce also imposed himself on the game.

After a tough start to the season, the Indi Bar Brett Jones Colts have found their mojo and racked up another impressive 89-point victory over Cockburn Lakes.

They faced stiff opposition from Cockburn early in the game, the Warriors’ run and spread causing a few headaches for the Tigers.

But Mason Rollo bobbed up to kick a couple of early goals to steady the ship for the Beach before the boys really started to put the foot down.

A strong six goal second quarter deflated Cockburn as the North Beach on ball brigade, led once again by a brilliant performance from Flynn Rose, could taste their third win on the trot. Mitch Tobin was like a wrecking ball at the coalface, only to be cruelly taken out of the game with a sprained ankle in the third.

Rollo continued to kick them from everywhere and the boys down back ensured Cockburn remained scoreless in the fourth. The Tiger’s willingness to hunt the footy in ferocious packs has become a feature of the Brett Jones Colts’ brand and will be incredibly important leading into a crucial match against University this week.

The under-manned Beyond Tools E1-Grade, battled hard against Coolbellup, before falling to a 45-point loss.

A challenging day became tougher when the bench was reduced by two players at quarter time and there was no rotations available after three-quarter time.

After an early onslaught the Beach started to play their brand but skill errors let them down. The effort was huge, though, and all the players put in a massive effort with 14 fully fit players come game’s end.

After quarter-time, North Beach assumed control, mirroring the dominance they had shown in the closing stages the previous round.

In the second half the Beach used the wide wings well thanks to the likes of James Winterton, Steven Clark and Jack Galvin.

With help from Peter Panagopoulos and Paul Clark dominating in the back half for the majority of the day, the Tigers got the desired result. Michael Humphrey was again dominant, as he has been all year, not only controlling the ruck but becoming a handy intercept player in the middle of the ground.