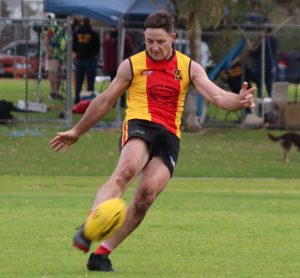 The modus operandi of the North Beach A-Grade team this season has been that in tight games they have found a way.

Occasionally they have manoeuvred through a minefield in the dark, somehow finding the key to victory in the dying seconds, and while it was not quite that dramatic, they left it late before enduring 7.8 (5) to 6.11 (47).

Last Saturday against North Fremantle at Gil Fraser Oval was yet another example, when the O’Rourke Realty team, playing a top two position came home with a late charge to score an important three-point victory over the Magpies.

Experienced midfielder/forward Dion Cownie shined a light, kicking two important late goals to put the Beach in front for the first time in the game. The second of those came with just a couple of minutes on the clock and enabled North Beach to win despite giving North Fremantle the best part of a five goal start.

On a day with a fluky breeze, the conditions on the banks of the Swan River were tough, but the Beach ground out a victory with the likes of Andrew McGuinness outstanding, with battle-thirsty Steve Mansfield and Sam Lamont also relishing the challenge.

Matt Holden continued his growth in defence to again produce an important contribution.

The Lifenet A-Reserves, already guaranteed a top two finish, were never under genuine threat from North Fremantle and won 8.11 (59) to 6.9 (45).

Nic Bowe was again in the thick of the action, with Jayden Black offering strong midfield support along with Conor Boylan. Ben Sweeny continued his outstanding season in defence while Dan Ryan and Jordan Webster were also influential.

The Plasterwise Phil Scott Colts had to win to ensure they remained in the finals hunt and completed the assignment with authority.

They set the game up with a sublime first quarter and they surrendered their advantage.

Led by midfielder Alex Thompson and ruckman Craig Bothe and defender Jackson Martino, the Beach carried too much class for the opposition.