Beach focus on the job 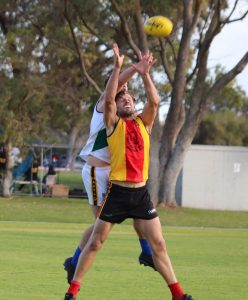 Michael Schofield was strong up forward with three goals

With a lot of sub-plots swirling around last Saturday afternoon it would have been easy for the O’Rourke Realty North Beach A-Grade to have been distracted in the last qualifying game of the season.

But coach Shane Paap and his players focused solely on the game within their control, did the job with purpose and distinction and locked down a place in the top two.

Finishing on top of the table was a possibility, but Curtin University-Wesley made sure there was no slip-up with a resounding victory over third-placed Fremantle CBC, to earn a home final.

Sammy Lamont also kicked four goals, while Michael Schofield and McGuinness kicked three goals each to give the beach a multi-faceted attacking division.

Dan Leishman produced his trade mark run and the classy performance will give the Beach great confidence going into this week’s second semi-final against Curtin this week at South Oval.

The Lifenet A-Reserves had already secured top spot, so motivation might have been a little light at the start of their contest against Kingsway and the result was a sluggish start.

After trailing by four goals to one in the first quarter, the Beach sprang to life, denied the opposition any further goals and then marched to a convincing 40-point win.

Ben Johnson was again a reliable focal point up forward, kicking four goals while Josh Chapman was outstanding in the ruck, Nic Bowe terrific through the midfield and the likes of Sean Foley, Oskar Tothill, Ben Sweeny and Alex Coleman were also important.

The Plasterwise Phil Scott Colts needed to get past Kingsway to ensure they advanced to the pointy end of the competition and they produced a quality performance, setting the standard for what was a great day for the club.

They jumped out of the blocks with an exhilarating first quarter and after leading by 27 points at the first change they were never going to allow their grip on the match to slip, eventually winning 10.6 (66) to 3.7 (25).

Alex Thompson, Lachlan Thomas, Lucas Osborne, Flynn Rose and Lachlan Scurria were all impressive while Caiden Eaton was a focal point up forward, kicking three goals. Jarrod Thompson was also a constant threat and kicked a couple of majors.