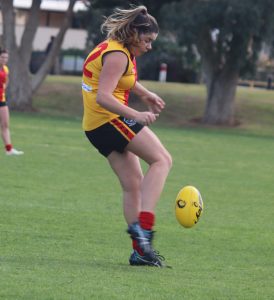 One of the vagaries of the female competitions in the Perth Football League is that when one team is struggling for numbers, the opposition reduces its on-field presence to match.

It’s a bit like junior football in that sense and completely understandable in an environment that is in its infancy.

Last Saturday, the Galleria Toyota A-Grade women – a team that has an abundance of players – was pitted against Kingsley, a team that was a little less affluent in playing strength. So the North Beach team, that filled the allowable 25 positions at its disposal, faced the situation of having nine on the bench because Kingsley had 16 players on hand for the start.

Shelby Maher and Jess McDaniel played their first games and immediately had an impact.  The bench was running hot for the whole game and Kingsley also was bolstered by the arrival of another player in the second term.

Jenny Harris was the dominant ruck and some of her taps to Tessa Anderson were first class, giving the girls quick movement inside 50.

Steph Dalton was dominant up forward with Irene Chiari also taking powerful marks and kicking truly.  Jess Meulenkamp was strong around the clearances and Laurence Charron played her best game for the club, doing all the one percenters.

The Beach controlled the game winning 8.9 (57) to 1.0 (6) and the majority is now finals-eligible. The next target is to lock away a finals berth.

The Grange Residential Integrated team caught the bus down to Warnbro for what promised to be a close contest.   The teams did not disappoint!

Warnbro were strong early and got out to a good lead before North Beach started to get reward for their efforts.  In a game that ebbed and flowed throughout the major stand out was the spirit of the contest and the willingness of the Warnbro team to embrace their North Beach rivals.

Where possible they shared the ball with some less able players and give them the opportunity to truly be part of the game.  Special mention to Garth Rodgers who is a fantastic ambassador for the Swans and the competition in general.

Max and Julian from North Beach, who have both suffered season-ending hand injuries, have also been exceptional, continuing to be at every training and game day assisting in the management and coaching of the team.

A stirring last quarter effort in front of goals was not enough for the Tigers to make up the difference on the score board but it did remind the team just how far they have come and what they are capable of doing.