Beach goes back to back 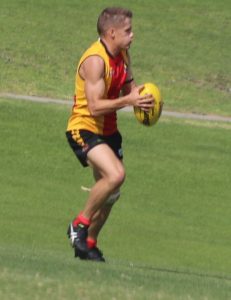 Preparation, any coach in any sport will tell you, is key.

Train hard, train with purpose, eat well and do everything right off the field and the rest will fall into place.

For the North Beach senior squad the first element of that maxim has been, to a large extent, beyond their control.

While they have been based at Charles Riley Reserve for training in the last month, preparations have been compromised. With a flood lighting upgrade imminent, there is no lighting, it has meant that when the natural has expired, the main oval has been redundant.

Usually that has been around 6.30pm, so to say that training preparation has been compromised is to grossly undersell the situation.

With all of that, though, the club’s four most senior teams have advanced into the bye round undefeated. Two wins apiece.

While it was tight – and the Scholars edged within a few points deep into the game – the Beach had played superior football for most of the encounter, to eclipse teams they vanquished in last year’s finals series (following a round win against Trinity Aquinas) in consecutive weeks.

To University’s credit, they continued to chip away at the Beach throughout the contest and refused to yield when the home side threatened to break the game open in the first half.

In addition, Ryan Ekert and the lively Michael Battaglia, who will quickly become a favourite of the red and yellow army, were ubiquitous up forward while Mitch Cameron made an auspicious return to senior football.

Michael Taylor and Travis Gray were rock solid down back and the Beach had all the answers, moving into the bye with a strong level of confidence.

The Lifenet A-Reserves continued the pattern of winning despite less-than-perfect preparations, convincing winners against University.

From the outset, they were in control through a mix of youth and experience.

The old heads of Ben Sweeny and Andrew McGuinness were assertive at either end of the ground, while young half-back Liam Catalfamo produced strong rebound out of defence, Nick Bowe and Nathan Torre were good through the middle and Oskar Tothill continues to develop his game.

Nathan Adler, who kicked 12 goals in the opening round in the Hybrid Linings D1-Grade, carried that strong form forward and kicked four as the A-Reserves carved out an impressive 84-point victory.

They controlled the game from start to finish and carried too much class for the opposition.

The Plasterwise Phil Scott Colts confronted their highly-regarded rivals in the first game of the day and while they were beaten by 22 points – 8.5 (53) to 4.7 (31) – they were always in the game.

Indeed, they controlled much of the first half, did not get a scoreboard return on their investment, and then paid a price when University scored heavily in the third term.

Defenders Jack Merson and Jack Davidson were solid through the game, hitting the contest hard and denying University regularly, while Jamie Bennett was outstanding through the midfield, providing important midfield run with Stratton Sargent.

While disappointed with the outcome, coach John Burton would have been pleased with the endeavour and the upside he could see in the performance.