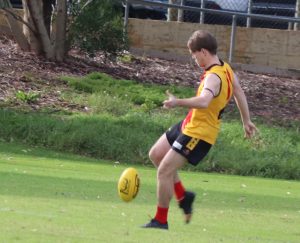 Mason Rollo…has been in good from for the Hybrid Linings C5-Grade.

Maintaining focus – and standards – when sitting undefeated atop the premiership table and confronting an opponent entrenched in the bottom half of the table can be challenging.

But the Hybrid Lings C5-Grade found no such difficulty when they produced another stellar performance to eclipse Mt Lawley by 108 points at Charles Riley Reserve last Saturday – winning 19.13 (127) to 3.1 (19).

Mt Lawley have battled this season but brought a real physical intent to the first quarter and unveiled their modus operandi early.

Sitting at the foot of the table, they could not sustain their intent, the Beach weathered that particular storm and then put the foot on the accelerator and dominated through greater system, fitness and skill.

David Purser combined with his fellow mids Nic Marsh, Jamie Bennett and Alex Thompson to put on a masterclass in clearance work made possible by the ruck dominance of Alex Coleman, Tom De Courtenay and Michael Schofield.

Up front, Matt irvine produced one of the most dominant individual displays in the first quarter of the game kicking two goals and having a hand in many more. His fellow forwards Josh and Mitch Cameron (four goals) and Mason Rollo (three) wreaked havoc and constantly looked dangerous.

The Beast Carpet Cleaning C5-Reserves were faced with a similar assignment, although the Hawks were in seventh place in this competition.

The Beach were ruthless, setting the tone with a nine goal opening quarter as they romped to a 179-point victory, scoring 27.17 while holding the opposition scoreless.

It was a nice way to complete the run of matches against the also-rans, while the next three rounds will see them confront teams who appear finals bound, barring a major hiccup.

The Beyond Tools E2-Grade continue to build and maintained their prospects of a home final with a commanding performance against Curtin University-Wesley.

The consistency of performance from players like Lucas Osborne, who kicked five goals, Fletcher Cooke and Luke Kuppens continue to drive the standards as the Beach consolidates its position inside the top five.

Michael Duckworth, Mitch Tobin and Daniel Njegich have also been influential in recent weeks as the Beach has blossomed into a genuine contender in this grade. They sit in third position, but know they have the arsenal to worry the two teams above them.

The GJ Osplumb E3-Grade lost a competitive match against Wembley by 28 points – 10.9 (69) to 6.5 (41) and the Grange Residential Integrated Rules found High Wycombe a little polished on their home deck.