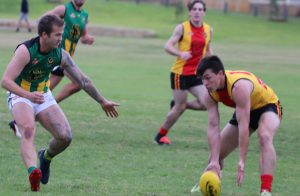 Mitch Gill in action against Scarborough

After an outstanding, albeit abbreviated qualifying round season, the stakes are now raised with just four clubs remaining around the Perth Football League A-Grade poker table.

Six clubs made their exit last week and now the price of victory and defeat is intensified.

The O’Rourke Realty A-Grade lost just one game during the nine-game qualifying round season, finishing second on the ladder to Curtin University-Wesley, the only team to beat the Beach all season.

The Beach travels to Curtin’s home venue keen to atone for that loss, with the prize for victory being a place in the grand final.

Curtin University won the B-Grade grand final last year and have made the transition to A-Grade comfortably. They are well drilled by coach Craig White and have a plethora of players with WAFL experience.

The Beach has also been ultra-consistent and will take high confidence into the match, given their 8-1 season and the fact that they were able to find a way to get over the line in some tight matches. Big finals are often determined by a will to win, a penchant for the contest and belief in getting the job.

The Beach has those traits in spades.

Through Joey Deegan, Adam Cockie, James Garcia, Mitchell Gill and Sam Lamont there is an abundance of class, while the personality of the team is exemplified in current skipper Mitch Dwyer and predecessor Beau Witheridge.

And the club boasts the best ruckman in the competition through Kyle Cranley, who has enjoyed an outstanding season.

In addition there is a neat mix of lock-down and rebound defenders in the back half through Luke Symonds, Dan Leishman and Ned Halley.

This looms as an intriguing contest with both clubs keen to acquire the first ticket into the grand final.

The Lifenet A-Reserves, chasing their fourth premiership in succession under Scott Holbrook, finished on top of the table and will also play Curtin University-Wesley at South Oval.

The Beach did not lose a game, but this is a new season with the four remaining contenders all capable of winning the title.

Again there is some class in the North Beach line-up, with Ben Johnson enjoying a fine season up forward and the likes of Nic Bowe, Sean Foley, Ben Sweeny and Oskar Tothill also ultra-consistent throughout the year.

The Plasterwise Phil Scott Colts had to win last week to lock down a finals spot and they now play Trinity Aquinas in a cut-throat final at Morris Buzzacott Reserve.

John Burton has the young Beach boys playing quality football at the right time of the year and are a definite threat coming from third place. They have no choice but to take it one week at a time because for every game they win from here, the next is sudden death.

Through players like Alex Thompson, Lachlan Scurria, Lachlan Thomas and Tai Kirkpatrick, they have players with a little X-factor that is always important in big games.