Beach looks to keep it rolling 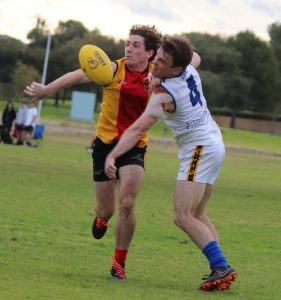 The equation for the O’Rourke Realty A-Grade team is pretty simple. At least in theory: Keep winning and a top two position is a lock; so is a home final.

But there are a couple of major obstacles in the path. The first of them being North Fremantle at Gil Fraser Reserve tomorrow.

While a clash against the seventh-placed Maggies might look like a formality, it won’t be. They are a proud club, playing at home and if the Beach is to be on top of the ladder tomorrow night, they will have earned it.

Coach Shane Paap and his team has lost just once in the first seven rounds of this abbreviated campaign, but it’s tight at the top and the consequences of a slip-up could be extreme.

But the Beach will be looking at the process, of playing their way in this match, ticking an important box and getting set for the final game of the season.

To do that the Beach will need their midfield, so exciting and consistent this season, to maintain standards set through this campaign. Mitch Gill, Craig Hoskins, Blake Piggott, Sam Lamont and Adam Cockie have been exceptional and they will need to reproduce their best.

Kyle Cranley has been a force in the ruck, while the defensive efforts of Daniel Leishman, Ned Halley, Luke Symonds and Simon Tunbridge have also been important.

Up forward Ryan Ekert has made a strong return from a knee reconstruction and the class of James Garcia was been enlightening.

But there is little separating any of the teams in this competition and North Beach knows they must reproduce their best. Captain Mitch Dwyer will certainly impress that upon his teammates, along with Beau Witheridge and Andrew McGuinness.

The Lifenet A-Reserves are guaranteed a top two finish and double chance, sitting on top of the ladder undefeated. They will look to consolidate against fourth-placed North Fremantle while the Plasterwise Phil Scott colts could go a long way towards guaranteeing a finals berth with victory over the Magpies.

They are in third position, but there is concertina of clubs between third and seventh, with just one game separating them.

While they travel to Gil Fraser Reserve, there will be plenty of action at Charles Riley Reserve.

The Hybrid Linings C5-Grade and the Coast to Coast Imports C5-reserves play their final qualifying matches of the season against Whitford and have already locked away a first semi-final position. That is unlikely to change, but they will be keen to take winning form into the finals series.

The Indian Ocean Hotel Brett Jones Colts are also guaranteed a top two finish and they complete their home and away commitments with a clash against Kingsway.

The Beyond Tools C4-Grade and the GJ Osplumb C4-Reserves will play their last games on Charles Riley Reserve (2) against Osborne Park. After punching well above their weight all season, they might have the opportunity to finish on a winning note against the eighth-placed teams in their respective competitions.

The Grange Residential Integrated Rules team will also fancy their chances of winning when they host Mandurah Mustangs at 11am on Chas Riley (2).
Fixtures