Beach pays for drop off 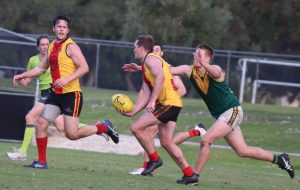 Craig Hoskins was solid through the midfield

A small drop in intensity, effort and drive can have a dramatic impact.

That was the case for the O’Rourke Realty A-Grade last Saturday when they slipped to their first defeat of the season against a hungrier and more committed Fremantle CBC at Charles Riley Reserve.

Obviously the Beach flagship team had taken all before it until last Saturday, occasionally even wining when not being at their best. But CBC was relentless on and when they smelled blood in the water, they went in for the kill.

After scores were level at half-time the visitors kicked 10 goals to four as they marched away with the points. Doubtless, the performance will be reviewed in depth to ensure it is merely an aberration.

While it was a disappointing result, there were some strong contributions from the likes of midfielder Craig Hoskins, forward Nic Reid, who finished with three goals, youngsters Dylan Brockbernd and Lachie Scurria as well as defender Hamish Coulton.

But the loss highlighted the need for an even contribution across the board and a united buy-in to the game plan.

The Lifenet A-Reserves maintained their unbeaten status with a commanding 53-point victory, ensuring pressure is maintained for places in the senior team.

Young defenders Jackson Martino and Connor Boylan were outstanding, while forward Nathan Adler continued his stellar season with five goals and Kade McKenzie and Beau Witheridge were strong in the clinches.

In addition Tim Edwards, Nic Bowe and George McColgan made strong contributions to ensure the Beach held sway throughout.

Perhaps the most outstanding team performance of the day was produced by the Plasterwise Phil Scott Colts who dominated after quarter-time in winning 11.4 (70) to 6.6 (42).

After trailing by a point at the first change, the Beach rattled on seven goals to two thereafter on the back of some brilliant work by the likes of Egan Brooks and Flynn Rose.

As Kobi Martin and Tai Kirkpatrick, who are ultra-consistent, made significant contributions once more, Corey Belouard and Joshua Moses were also at the forefront of the performance.

The Indian Ocean Hotel Brett Jones Colts were jumped by University and while they recovered, the balance of play relatively even after quarter-time, the damage was done.

It was a tough start under new coach Darcy Sparks, but they boys are committed and will work to improve.

Half-forward Riley Sparks was in good touch while midfielders Ronan Rose and Lachie McLeod put their shoulder to the wheel and defenders Anthony Stephenson and Jacob Frediani stood up to the University pressure.