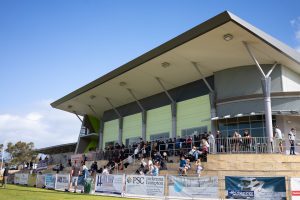 Victory did not come without a degree of anxiety, but the O-Rourke Realty A-Grade North Beach outfit won consecutive matches when they over-ran Collegians at Charles Riley Reserve on Saturday.

Trailing by five points at half-time, the throng of life members  and past premiership heroes gathered in the social hall might have been a little concerned, but after adjusting structure, attitude and efficiency it was one-way traffic after the long break.

Similar to the way they started the season, posting seven successive goals in the last term against Trinity Aquinas, North Beach was irresistible in the second half.

In this abbreviated season everything matters; winning, percentage, man management. You name it.

So after two rounds the Beach sits on top of the ladder and just as there were some similarities in the team performance from round one to the second instalment so, too, were there consistencies in the individuals who drove it.

Mitch Holbrook kicked three goals in consecutive matches, Joey Deegan won the Gary Tait Medal as best afield, Blake Piggott and Sam Lamont were damaging through the midfield, Dan Leishman provided great offence from defence and Luke Symonds was a rock in the back half.

Andrew McGuinness made a conscious effort to step it up when the Beach needed it most, while Craig Hoskins and James Garcia continue to impress.

The Beach also unveiled another impressive graduate from the victorious 2019 colts line-up, Judd Clinch showing he had the attributes to contribute at the highest level of amateur football.

Adam Swain was dominant through the middle with Conor Boylan, a key figure in last year’s colts flag, while association best and fairest Nic Bowe and Tim Edwards were also in good form.

The Plasterwise Phil Scott Colts lost an entertaining contest with some quality football produced by both sides before Collegians endured 9.5 (59) to 8.5 (53).

Lachlan Scurria and Alex Thompson were impressive through the midfield, while Jackson Martino and Dane Webster were solid in defence.

In a physical contest at Gwynne Park, the class and skill of the Hybrid Linings C5-Grade shone through, North Beach eventually eking out a quality 51-point victory – 13.7 (85) to 5.4 (34).

Tully Wickstein was outstanding, setting the benchmark through the midfield while Nick Marsh, Jayden Black, Ryan Clapham and Brendan Collins were also solid throughout.

The depth of the North Beach senior list was emphasised in the C5-Reserves, with the Coast to Coast Imports North Beach outfit piecing together a flawless performance during which Armadale failed to hit the scoreboard.

At the same time North Beach piled on 24.23 (167) with Tom Orford and Ernest Dwyer at the forefront with Jack Steel, all of whom kicked four goals, while Mason Rollo and Brayden Quinn also impacted the scoreboard with three goals apiece.

Jack Merson and Caleb Davis were also prominent in a wonderful team performance.

The home team kicked four goals straight in the blink of an eye to start the game and were dominating all over the park. A remarkable goal from debutant Zach Farrell gave the Beach some hope going into the quarter time break but there was still a lot of work to do to turn things around.

The injection of Mitchell Hunt and Lachie McLeod into the guts steadied the ship in the second term as clearances and goals started to flow. A brilliant fight back and fierce determination around the ball left North Beach trailing by only five points at half time.

Lachie Gardiner sold candy to two would be tacklers and snapped brilliantly to kick the opening goal of the third term as North Beach lifted to yet another gear with Jared Thompson providing plenty of creativity off half back.

From then on our boys didn’t look back and silenced the Collegians bench with a brilliant display of hard, contested footy. One of the best wins – 7.8 (50) to 6.4 (40) – for the Brett Jones Colts in the last couple of years.

The Beyond Tools C4-Grade fell away after a competitive start against Manning but should be commended for their efforts.

The North Beach fifth grade side was combating Manning’s senior team and it is a common occurrence this year with the way the lower grade competitions are structured, with fewer nominations for teams at that level.

Novak Smith and his team will continue to punch above their weight and despite losing 4.4 (28) to 21.13 (139), never surrendered. That fighting spirit was exemplified by Michael Dodd, James Sullivan, Owen Orr-Young and Michael Bramley.

The GJ Osplumb C4-Reserves were obviously against the second 22 from Manning and were highly competitive, falling by just nine points.

The Prestige Ceilings A-Grade women lost their first game of the season, despite one of their best performances – falling to University 3.2 (20) to 4.4 (28).

With a number of players playing two games, the Beach tired a little at the end after keeping  University scoreless  in the first quarter and adding only one point in the second.

The change came in the third quarter with a handful of senior Uni players lifting. In the end the Beach fell by eight points, but are confident it will make this team a stronger outfit.

Lexi Lindsay was a focal point up forward and the back-line was held together by Kellie Holden, with another great effort coming from Olivia Hongell.

The Peak Fitness C3-Grade women’s team needed a number of players to back up and play two games, highlighting the commitment of the women’s squad.

It was a tough battle in the first half but the team lifted their intensity to keep Uni scoreless in the second half. Yasmin O’Connor was a standout in the ruck with Josie Mark and Amelia Davies providing the run and carry, hitting up the Beach forwards.

Jess Woolcott and Clarissa Power provided committed leads up forward to kick two goals apiece. It was again another positive performance despite the loss with many players representing the club for the first time.

The Grange Residential Integrated team continued their evolution with a strong and competitive performance against CBC Fremantle Green. It’s not about wins and losses here, but they were terrific in going down by five points.