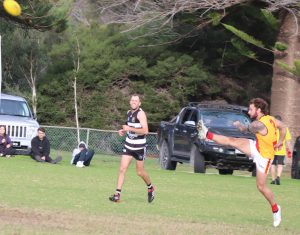 The grunt work of Steve Mansfield was important for the O’Rourke Realty A-Grade.

At times during the O’Rourke Realty A-Grade game it was a pleasure to watch the ladder leaders impose their will upon North Fremantle. At others it felt best to look away.

There were moments of concern, even anguish as the Beach began to lose their grip on the game in the second half.

The third quarter, in particular, was dominated by the Maggies who bridged a five-goal gap to be just seven points down at the last change and appeared to have the advantage of a surging breeze in the final term.

Built around the imposing performance of Kyle Cranley in the ruck, the class of Andrew McGuinness both forward and through the midfield as well as the grunt work of Steve Mansfield at stoppages, particularly in the last quarter, the Beach had the answers.

As well, Sam Lamont and Dan Leishman were invariably involved in the match highlights while Luke Symonds was outstanding in his defensive role and Christian Bottechia provided strong rebound.

Because the good was very good and the bad was poor, it was difficult to know how to feel post-match. Pleased to win but a little perplexed might best surmise the emotions.

The Lifenet A-Reserves maintained their unbeaten form, too. It was by a more convincing 52-point margin, but it was no less confusing.

The Beach dominated in winning 8.13 (61) to 1.3 (9) but it raised the question of whether one of those mythical left-handed footies, as espoused by North Melbourne legend Malcolm Blight some years ago, might have made its way out of the Burley compound.

Perhaps the scoreline best reflects the issue, but players who are normally efficient by foot specialised in flour bag punts. Conditions were perfect on the banks of the Swan River, so there were no excuses.

Skill execution aside, the Beach was too gifted for the opposition, ruckman Josh Chapman leading the charge with a commanding display while Matt Raynor and Josh Stott, along with Tim Edwards were as effective as anyone on the ground.

Nathan Adler kicked four goals, but could have had considerably more had he been able to perfect the spin of the ball, and Jackson Martino worked hard in defence with experienced midfielders Adam Swan and Nic Bowe exerting their usual influence.

Peter Coles was outstanding up forward kicking seven goals while strong support came from Nathan Perry (three goals) and supply was generated by the likes of Matt Coleman, Justin Prior and Callum O’Shea.