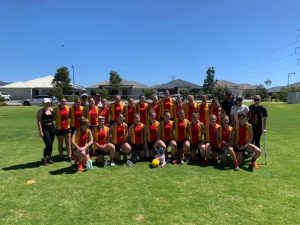 North Beach is on a campaign to build upon the foundations of its women’s football program.

With new Project Ceilings women’s A-Grade coach Hayden Marchetto taking on the challenge of steering the female squad through the next phase of its evolution the Beach is anxious to shore up both its coaching ranks and playing numbers.

While there is enough talent to field the two nominated teams for the 2021 campaign, the club requires even more players to ensure there is adequate coverage for the likely absence of players through unavailability.

Marchetto, who took over the senior role just a few weeks ago when incumbent Dean Logan was posted to the country on a business contract, has accepted the role with great enthusiasm, but needs broader support.

“The girls have really embraced the program this year, but we certainly need more players and more support,” Marchetto said. “We have been building on our skill acquisition in pre-season and have already had a good hit-out against Piara Waters.

“We will this week play the first match on a big day for the club against West Coast Cowan at City Beach Oval on Saturday (9am) and look forward to another opportunity where our developing squad can continue to build on their match skills.”

Entering their fourth season in the competition, the women have embraced every challenge. Already a brace of North Beach players have earned opportunities at higher levels with Stephanie Ball (Swan Districts) and Zoe Panagopoulos (West Perth) elevating to play in the WAFLW competition.

The club has been proud to see them take their game to the next level.

While they have acquitted themselves with aplomb, their elevation to WAFLW means there are opportunities in the A-Grade line-up.

There have been a number of new arrivals during pre-season and the women’s competition kicks off on April 24 with a round one game at Charles Riley Reserve.

Anyone interested in playing, coaching or offering support in an off-field capacity should contact Marchetto (0411 747 454) or president Gary Stocks (president@nbfc.com.au or 0412 144 588). Players who have never played Australian football before are just as welcome as those who have experience in the sport.