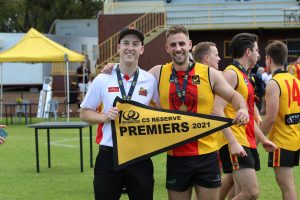 Familiarity, the proverb suggests, breeds contempt. That might be the case in a broad brush application, but in a football sense it could not be further from the truth.

Particularly with the rivalry that has been built between North Beach and Curtin University-Wesley in the C5-Resereves in recent seasons.

They have created the strongest of rivalries, acquired a deep respect and understanding of each other and that knowledge was used to good effect when the Beast Carpet Cleaning C5-Reserves completed a stellar season with a premiership.

In a rematch of last year’s Grand Final and the third consecutive time that North Beach had clashed with Wesley at the pointy end of this season, both teams had a strong insight into the other’s methodology.

The Beach went in with two changes, with key defender Liam Vardy and key forward Brendan Collins both returning from injury. It was obvious before the game that a lot of the younger players were nervous but the older heads on the team helped settle their nerves.

The game began with intensity expected with a flag on the line, both teams attacking the ball ferociously, and bodies were flying everywhere. Wesley Curtin had two very good intercept players being their ruckman and their CHB who had hurt North Beach throughout the year.

The Beach adjusted, were clinical with their ball movement, resisting the temptation of bombing it long, avoiding the two big Wesley Curtin players and getting a crumbing goal at full forward thanks to wingman Reef Samuels who was outstanding on the day.

He led by example at the first centre clearance taking three running bounces through the middle of the ground and kicking the ball inside 50. Tully Wickstein then also took the game into his own hands kicking three goals in the second half to help put the game out of reach for Wesley.

David Purser was brilliant through the middle and was ably assisted by ruckman Ryan Clapham who did not rest all day. Nic Baroni once again had a great game playing as a lockdown defender on a very dangerous opponent. Isaac Seidner and Ben McAulliffe were also strong contributors.

This was a terrific win by a team who was on top of the ladder since round two. Throughout the year over 40 players represented the club in this team and they all played a major part in the premiership.