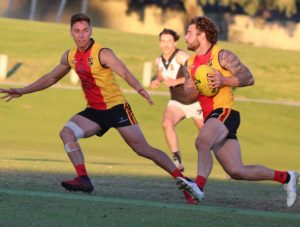 Steve Mansfield…tough in the clinches

A poor second quarter proved costly for the O’Rourke Realty A-Grade against Kingsway as they slipped to an eight-point victory against likely finals rival Kingsway at Kingsway Reserve on Saturday.

After a relatively even first quarter, the Beach lapsed badly in the second term as the Roos took charge of the game, rattling on five goals to break the game open  which was the decisive period in a match they won 13.5 (83) to 11.9 (75).

While the Beach produced an improved second half, fighting back from a 23-point half-time deficit to claw back within a kick in the final term, they left themselves too much work to do.

Again, Steve Mansfield was outstanding around the contest while Dan Leishman provided trademark rebound out of defence and James Garcia was forever dangerous up forward, finishing with four goals.

Other positives were the performance of Mitch Mackenzie while Tom Hooper was influential both in defence and in the ruck. Nic Reid finished with three goals and was particularly lively after the main break.

So destructive were they that they kicked 16 goals in the first half – including 10 in a sublime second term, representing a major every two minutes – as they imposed their will on the contest. Take out the time needed to relay the ball back to the middle after goals were kicked and it was an amazing blitz.

Clearly there were individual winners all over the ground, with Nic Bowe and Adam Swain controlling the game in the middle, while Josh Chapman gave them first use of the ball with a polished performance in the ruck.

Ben Johnson and Nathan Adler kicked 11 goals between them, while Shannon Lucassen and the experienced duo of Beau Witheridge and Dion Cownie also imposed themselves on the game.

Egan Brooks and Tai Kirkpatrick, so consistent throughout the season, along with Kobi Martin and Justin Prior also maintained their output levels as the Beach pushed to the top of table, courtesy of a percentage advantage over Collegians, Trinity-Aquinas and University.

With games against all of those teams in the run home, the Beach holds its destiny in its own hands.