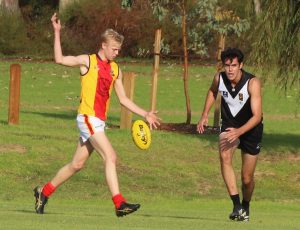 Shannon Lucassen…one of the young players to shine for the Beach.

An irresistible surge of brilliance, capitalised upon by forwards Andrew McGuinness and Ryan Ekert, effectively locked away the result against Wembley at Pat Goodridge Reserve last Saturday.

After a wasteful first term, when the O’Rourke Realty A-Grade failed to get the desired outcome on the scoreboard, kicking 1.5, they finished off their work with a seven-goal second quarter.

In that term both McGuinness and Ekert kicked three goals as the Beach dominated in the midfield, rebounded off half-back, with the work of veteran Dan Leishman integral to the opportunities that were generated.

In addition to the aforementioned catalysts for the victory, the energy of James Garcia through the midfield, in conjunction with Mitch Gill, as well as the defensive effort co-ordinated by the likes of Ned Halley, Luke Symonds and Christian Bottechia, was too much for Wembley to overcome.

Nic Reid also made a highly-anticipated and productive return to amateur football, building through the game in his first hit-out for the year.

Pleasing, also, were the efforts of a number of young players who have elevated to the team this season including Shannon Lucassen, Dylan Brockbern, Jack McIntosh and Caolan O’Connell.

Similarly, the Lifenet A-Reserves showed a diverse range of mature and emerging players who combined to produce and emphatic 50-point victory – 12.8 (80) to 4.6 (30).

With Simon Tunbridge moving from defence to the midfield and combining with ruckman Josh Chapman and Nick Bowe, the match was played to a large extent in the Beach’s attacking half – particularly after the main break.

North Beach led by just 11 points at the half, but kicked seven goals to one thereafter, with Nathan Adler providing a strong target up forward and finishing with three goals.

A stingy defence was again led brilliantly by seasoned half-back Jarrod Chapman, in unison with Sean Foley and Jackson Martino, while Adam Swain was also lively in the middle and both Jordan Webster and Travis Burton generated opportunities forward of centre.

The Plasterwise Phil Scott Colts were always in control against the Magpies and coasted to a 98-point victory.

They dominated every facet of the game, with Tai Kirkpatrick continuing an exceptional start to the season with a six-goal bag, while Justin Prior and Blair Wilson followed suit.