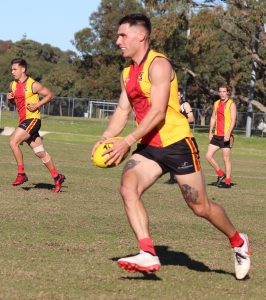 Nic Reid….relished the environment and kicked eight goals against Collegians

Round 18, the climax to the qualifying games of the 2021 Perth Football League season.

Charles Riley Reserve is bubbling. Sponsors enjoying a marquee day, past players sliding their way into an icy slurry in the name of charity, kids running around in North Beach jumpers. The footy was almost an aside.

Not much would change in terms of the results. The O’Rourke Realty A-Grade were going to play in the qualifying final regardless of the outcome against Collegians.

That said, it would be important to take momentum into the finals series and after a sluggish first half, the Beach turned up the jets and powered to a 66-point victory.

Forward Nic Reid relished the environment and kicked eight goals in a classy display as he resumed from a hamstring issue and imposed himself on the contest.

Craig Hoskins was exceptional through the midfield, youngsters Dylan Brockbernd and Shannon Lucassen also excelled while in the back half Christian Bottechia and Ned Halley were in good touch as the Beach won 17.14 (116) to 8.6 (50).

They finished the season undefeated and are in good shape as they target a fifth successive premiership.

Key defender Jarrod Chapman was again outstanding, rebounding with authority out of the back half, while midfielders Nic Bowe, Josh Stott and Tim Edwards fed off ruckman Josh Chapman and ensured the ball lived in the forward half for the Beach for most of the match.

Collegians kicked their solitary score, a goal, in the opening term and watched as the ball transferred to the attacking zone of the hosts thereafter. Nathan Adler, who has enjoyed an outstanding year, bagged another three goals along with Jordan Webster while Ben Sweeny was again a leader and initiator from the back half.

The Plasterwise Phil Scott Colts were highly competitive against the quality Collegians outfit before slipping to a 32-point loss – 6.8 (44) to 11.10 (76).

Much of the damage was done in the first half when they failed to get a return on their share of the play, while Collegians also finished strongly with five goals in the last term.

Tai Kirkpatrick, Matt Coleman and Justin Prior were strong contributors through the midfield while Nathan Perry, Kobi Martin and Egan Brooks did all within their power to get the Beach across the line.