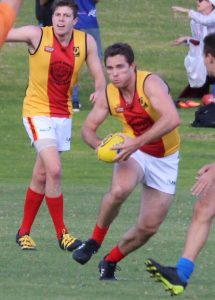 If the dictionary were to define what the North Beach Football Club stands for, alongside the text would sit a picture of Beau Witheridge.

Competitive, respectful, proud and humble. He is the personification of all of those traits.

And tomorrow he will formalise another chapter in his storied career when he celebrates his 250th game for the club as the O’Rourke Realty A-Grade team clashes with long-time rivals North Fremantle.

Fittingly, his milestone comes on a day when the club gives a nod to the past, pays homage to those who support it and have done so much to make it what it is with life members, past players and Beach Club members converging for this match.

Witheridge, a long-serving captain and four-times Brian Kiely medallist as the A-Grade fairest and best, will hit the landmark on a day of great significance.

The star midfielder, revered universally as a player who upholds the values of the club and the competition, has been a part of the fabric of the Beach for almost 15 years and is a two-time A-Grade premiership player.

He was an emerging star when he was part of the 2009 and 2010 premiership teams that were such an integral part of a historic run of success, the second of those flags being the last of seven successive triumphs under the stewardship of Bill Duckworth.

On a day when he will celebrate a wonderful personal achievement another much-respected senior player, Michael Taylor, will draw the curtain on his career.

Taylor has been a significant factor within the fabric of the senior squad across 120 games, his influence as a member of the senior leadership group quite profound. Not only did he set a wonderful on-field example, but he was important in creating the unity that permeates through the group.

A man who played with courage and had an innate ability to read the play he will focus on business and family life. Taylor did not play his career exclusively at the Beach, but he has been influential for the last seven or eight seasons.

While the club will celebrate two highly-regarded veterans of the club, another rising star, young forward Ben Johnson, will make his senior debut.

It’s a part of football’s circle of life and Johnson – along with the likes of Joe Deegan, Liam Catalfamo, Dan Ryan and Austin Sheard – will be called upon to carry the mantra forward.

Witheridge still has plenty of football ahead of him, as do the likes of Andrew McGuinness, Matt Irvine and Kyle Cranley, and the next generation of North Beach players can learn much from them while they have the privilege of playing alongside them.

Tomorrow’s clash with North Fremantle is another opportunity to absorb some knowledge and study the way established senior players go about their business.