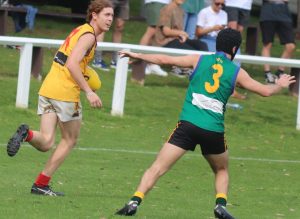 The Hybrid Linings D1-Grade knew the importance of exploding out of the blocks with two of their three losses for the season coming against their opponent for the big dance, University.

North Beach got what they sought, well kind of. The first couple of minutes in the season decider saw them dominate possession, but they needed to score.

They didn’t. University held off that initial challenge, peeled off a few goals in succession and held the upper hand.

The North Beach cause was damaged when captain and D1-Grade fairest and best Craig Hall was collected high when going for a mark about 10 minutes into the game. He sat out the next 20 minutes under-going a concussion assessment while the Scholars took charge.

It was a similar story in the second quarter, although the Beach held the balance of play without  making any great in-roads.

Despite trailing by four goals, there was a sense that North Beach was “in” the game.

Through the midfield Nick Marsh, Jacob Desmond and Jayden Black were wielding some influence, Lucas Gardiner was outstanding in defence, with Liam Pardini, Aran O’Connell and Shane Duckworth, while Ryan Clapham and Alex Coleman were impactful in the ruck and Josh Cameron and Caolan O’Connell were lively up forward.

A few changes to the forward structure for the third quarter, combined with renewed belief, saw the Beach claw their way back. They were looking to score three goals to none in the term and made good that pledge until a late, lucky goal saw University halt momentum.

Uni then kicked the first goal of the final quarter and try as they might, the Beach could not peg back that margin, the class and skill of the opposition proving insurmountable.