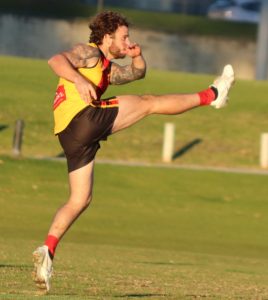 Steve Mansfield…has been important in the clinches

When playing against Fremantle CBC there is one thing that can be guaranteed – it will be a contest.

Throw in the uncertainty of the current environment which saw a round of fixtures called off last week and that fact that CBC are in a battle for one of the bottom two positions in the top five and the situation is magnified.

CBC sit in fifth position, just percentage behind fourth-placed Kingsway and a win in advance of three teams pressing to leap frog them – Trinity Aquinas, North Fremantle and Scarborough. It’s a concertina between fourth and eighth.

So every win is precious. Indeed, in this circumstance, every goal is precious. Percentage can – and is likely – to play a part.

It means that the O’Rourke Realty North Beach A-Grade outfit can expect great heat in this battle. So far, the Beach has answered every challenge and have been able to respond when other teams have put down the hammer.

In what looms as a big day at the Beach, which would have been even bigger if not for last week’s COVID intervention which caused a postponement of ladies day, Shane Paap and his team will be looking to consolidate top spot.

It’s always something of an unknown when teams have had a week off, but hopefully when the Beach turns the key the engine is humming as it was a fortnight ago.

In terms of ladder positions it’s a similar story for the Lifenet A-Reserves, a case of the undefeated North Beach unit tackling fifth placed CBC.

Only in this competition, CBC are not under as much pressure from teams below them, with a two-game and 90 percent buffer between themselves and Wembley.

The Beach will welcome back Nathan Dwyer and Michael Schofield back into the reserves and both will be keen from strong performances.

The Plastwerwise Phil Scott Colts face an absorbing contest with CBC – with victory galvanising their position in the top five.

The Beach holds down third spot, but only on percentage and CBC are sixth, just one win away. If the Beach can prevail it will keep their opponents at arm’s length.

There will be action aplenty at Royal Chas Riley, with the three A-Grade fixtures, as well as the Peak Body C4-Grade women, the Grange Residential Integrated Rules and both the third and fourth grades all strutting their stuff before the Beach faithful.