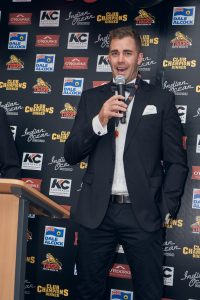 Kyle Cranley, one of the outstanding players of the current era at North Beach Football Club, took away the major prize from the Club Champion Awards last Saturday night.

The athletic big man joined the ranks of the club’s finest when he won the Brian Kiely Medal as the fairest and best player in the O’Rourke Realty A-Grade team.

Runner-up to  Dan Leishman last season – and runner-up to midfielder Joey Deegan in the   BJ Jamieson Medal for the fairest and best player in the Perth Football League A-Grade competition this year – Cranley finally gabbed the lion’s share of the spotlight.

He was a decisive winner, despite missing a game through injury, from Sam Lamont, who won the prestigious award in 2018. Cranley polled 75 votes with Lamont next best on 50 votes.

To emphasise the outstanding season that Cranley enjoyed, he also won the valued player-of-the-finals gong.

While capacity at club headquarters was reduced by CODID-19 restrictions, there was still a strong representation across all grades and a healthy sprinkling of revered life members, sponsors and dignitaries in the room.

Perhaps the most raucous reception of the night erupted when Novak Smith was announced as a life member. A selfless contributor to the club who has coached and played in the lower grades for many years, he also assisted by providing support to the club’s female teams in 2020.

Poignantly, he was presented with his life membership medallion by another stalwart of the lower grades – and current coach of the Integrated Rules team –his close mate Peter Panagopoulos.

The best clubman award was presented to Ben De Rosa – another popular decision. De Rosa, the club’s treasurer, works feverishly off-field, helped to set up some virtual ‘Thursday Night Live’ shows to keep members connected when the club was in lock-down and produced some elite financial forecasts that enabled the club to plan with some certainty at an unsure time around the fiscal risks of 2020.

The Lifenet A-Reserves and the Indian Ocean Hotel Brett Jones Colts were also feted as the club’s 2020 premiership teams, while Toby Anscombe, forced into retirement from the Grange Residential Integrated Rules, was presented with a framed guernsey.

Below is a list of all award winners across the grades: