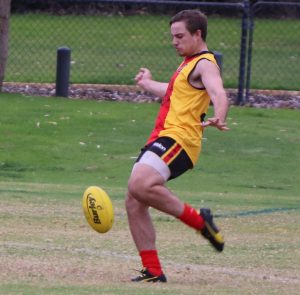 They say the best teams in the game build from defence and the rest evolves from there.

For the Hybrid Linings C5-Grade, that has been an integral part of their season that so far sees them unbowed. The capacity to restrict the opposition’s scoring capacity has been a key, while also launching many successful offensives from the back half.

When the Beach played Curtin University-Wesley last week, they knew it was going to be a challenge with the Tigers of the south among the other contenders. But Glen Hinkley’s men had the answers, winning 10.11 (71) to 5.4 (34).

Curtin were only two wins behind the Beach and had already claimed a couple of big scalps in 2021 so were not to be underestimated.

After an even first quarter, however, North Beach found another level, Curtin could not go with them and if not for a couple of cheap goals in the dying stages it should have been closer to a 50 point result.

Riley Hinkley was resolute at centre half-back, while Matt Irvine provided great rebound and run from his flank in his best game for the season and Matt Seaton continued his great form in completely nullifying the Curtin small forwards.

The midfield combination of Alex Thompson and Tom De Courtenay, in his 150th game, also guided the team to their eighth straight victory. Thompson was superb in the midfield with plenty of smothers, tackles and blocks and capped off his game with his first goal in three seasons.

Brayden Quinn was dynamic on his wing and his skill by foot was cherished by the forwards, particularly Mitch Cameron who kicked four goals.

The Beast Carpet Cleaning C5-Reserves also faced their biggest challenge of the season, against the other undefeated team in the competition and responded emphatically.

Playing on the main oval, the endurance and youth of the Beach proved decisive. They switched on and ready for our biggest test of the year. Right from the first bounce the Beach controlled the tempo of the game.

Ryan Clapham and Adam Miotti put in huge performances against Wesley’s ruckman, nullifying his impact around the ground. Joel Brown and Dave Purser led from the front and won the contested footy all day, giving the likes of Ryan Samuels and Ben Pedulla the ability to really break the game apart on the wings.

The Indian Ocean Hotel Brett Jones Colts boys played with high intensity and pressure from the outset as they carved out an impressive 38-point win  against Swan Athletic – 10.11 (71) to 4.9 (33).

After a tight first quarter, with just one goal apiece, the Beach built their game aroiund strong forward pressure from Sam Halley.

With that that defensive pressure as a key element of the performance, the Beach controlled the game after quarter-time, building on their advantage in each quarter.

Tully Wickstein and Brayden Bowden kicked seven goals between them while Fletcher Cooke was again a key contributor.

The Project Ceilings A-Grade women produced a bold performance against the highly-rated University before going down by just seven points – 2.7 (19) to 2.0 (12).

Clare Dickson and Jasmine Hunneybun were outstanding while Tessa Anderson produced a trademark performance and Elysia Burvill was strong and resolute.

The Peak Body Fitness C4-Grade suffered a little through the recent injury rate and lost by 40 points to West Coast, but they never stopped working for each other.

One of the highlights of the day was the performance of the Grange Residential Integrated Rules who produced a dominant 49-point victory over Wembley.