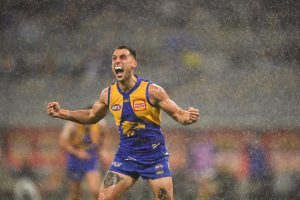 The ascension of Nic Reid from amateur football to make his AFL debut with the West Coast Eagles was one of the most compelling stories of 2020.

After that chapter at elite football was closed at the end of the season, with the squeeze on list sizes a major factor, Reid will now return to North Beach Football Club, where his remarkable journey began.

The 25-year-old forward who had an interrupted campaign through a shoulder reconstruction and then tendonitis in a hamstring, played three senior matches in the most extraordinary year in AFL history.

With his teammates, he spent two separate stints in the Queensland hubs and with no second tier football available relied on “scrimmage” matches with the opposition to build his case for selection.

Reid, who had taken 12 months’ leave from his employment as a teacher at a local high school, will also resume is career away from football when the new school year resumes.

After considering a number of options, from both country and WAFL clubs, Reid will resume with North Beach where he has played more than 100 games and is something of a cult figure at Charles Riley Reserve.

“I’m looking forward to getting back and playing footy with my mates,” Reid said. “I had other opportunities to play elsewhere, but I love North Beach and the people involved down there.

“It would have been nice to have continued at the highest level, but that wasn’t to be. I really enjoyed the experience and I’m thankful for the opportunity the Eagles gave me as well as some great friendships I made.

“But that has now ended and it will be exciting to get among the boys at the Beach and have a bit of fun.”

North Beach president Gary Stocks said he was delighted to have Nic back at the point where his football journey began.

“Nic was obviously one of the great footy stories of the past couple of years, firstly playing with the Eagles in the WAFL and then living every young player’s dream of playing to the highest level,” Stocks said. “We lived every moment with him and are so proud of what he achieved.

“We all wish the ride had gone a little longer because we believe he had more to show on biggest stages, but that’s the nature of the game sometimes and we’re absolutely thrilled to have one of our favourite sons come home.

“At 25 he is still to hit the peak of his powers and the Beach faithful will relish seeing him back in the distinctive North Beach strip next year.”