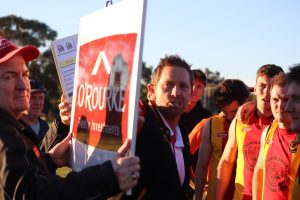 Coach Shane Paap was content with the strong performance against Wembley.

Perfection is rarely – if ever –achieved, but that doesn’t mean it is seen as unattainable. When the O’Rourke Realty A-Grade North Beach outfit eclipsed Wembley by 88 points at Charles Riley Reserve last Saturday, coach Shane Paap was content.

It was as close to a four-quarter effort that his team has completed this season and in doing so they kept their 2021 slate clean with 10 successive wins. They know there will be bigger challenges than the one they encountered against the Magpies, who are a likely to slip back to B-Grade at season’s end.

That didn’t deprive them of the moment, though, as they enjoyed a performance that saw them build on their quarter-time advantage at every ensuing break and every player in the team made a contribution.

Mitch Gill was an irresistible force through the midfield, capping off his game with four goals, while others like Sam Lamont and Steve Mansfield were also brilliant in the engine room and ruckman Josh Chapman, in his first senior game for the season, was outstanding.

Up forward Oskar Tothill again showed his thirst for the contest as well as his versatility with his second four-goal bag of the of the year and both Andrew McGuinness and James Garcia menaced the Wembley defence with their skill and guile.

Nic Reid, mixed his game up, playing more on a wing and so did Liam Catalfamo as both were exceptional.

But much of the best work was done in defence where the rebound of Dan Leishman and Christian Bottechia was exemplary and young defender Matt Murray continues to grow. It all added up to a 17.18 (128) to 5.2 (32) victory.

It was a similar story for the Lifenet A-Reserves who were always in control of their clash and had it not been for wasted opportunities in front of goal in an opening term that yielded 1.5, the margin might have been similar.

Tim Edwards, up forward and through the midfield, produced moments of magic, with Chris Wells, Beau Witheridge and Nic Bowe while Matt Raynor and Jackson Martino stood out in defence.

Simon Tunbridge, playing forward and even pinch-hitting in the ruck, gave a solid display with his elite kicking skills a feature.

The Plasterwise Phil Scott Colts dominated their match on the way to an 84-point triumph and were never under threat as they romped to 14.21 (105) to 3.3 (21) victory.

Clearly they could have made more of their opportunities, but Sam Cooper was a beacon up forward, his strong hands a feature as he kicked six goals in a commanding performance, while Craig Bothe kicked three.

Captain Justin Prior exploded through the midfield with some wonderful clearance work, particularly out of the middle, while Matt Coleman played with his trademark grit and Flynn Rose and Kobe Martin also wielded a strong influence.

After starting slowly, the Beach clawed their way back into the contest largely due to the work of Connor Ougan, Ronan Rose and Peter Jolley, but they fell tantalisingly short. The ball was in their forward as they made one last valiant attempt to snatch victory but ran out of time.