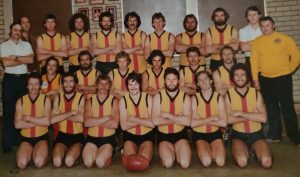 In the fullness of time an appreciation for the characters that achieve something special can truly come to light.

When the North Beach Football Club won the F-Grade premiership in 1980 – the first  senior flag won by the Beach – it was clearly a watershed moment in club history.

The club’s reserves team won the inaugural flag, which was built largely around the oft-touted premiership quarter – the third – when the Beach held Collegians scoreless on the way to a 15-point triumph -9.6 (60) to 6.9 (45).

Perry King was a trump card up forward with four goals while Greg Dwyer, father of current A-Grade captain Mitch, was influential through the middle and kicked two goals.

Eric Hooper was exceptional in the engine room and was adjudged best afield, while Gary Jones showed a great appetite for the contest and Darryl Kernaghan, a renowned hard nut, did his reputation no harm in this match.

King, who was anointed as a life member in 1980, was a prolific goal-kicker and remains a staunch supporter of the club, so often pulling up a camp chair on the grass around the 50 metre line to the north of the club facility.

This team contained three other men who would become life members of North Beach – Ross Cruttenden, Rob Fulcher and Rod Mullett – who were devoted servants of the club.

After North Beach got away to a solid start, opening up a three-goal lead at quarter-time, Collegians manufactured a momentum shift and a five-goal second term saw them take a four-point advantage in to the half-time break.

The Beach responded with a disciplined second half, in which Collegians added just one goal.