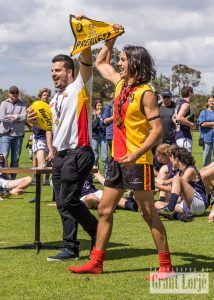 In his own words
By Joel Gray

Blustery conditions in Bentley awaited the Indian Ocean Hotel Brett Jones Colts on the day of the big dance. Our boys had been hoping this day would come around all year and finally it had arrived. The camaraderie, spirit and belief amongst the group was as strong as it had ever been all season. Just one game away from glory. So simple to imagine, an entirely different thing to realise.

North Beach decided to kick with the breeze in the first quarter but things did not quite go to plan. Whilst the contest was fierce and pressure intense it was Collegians who handled the heat better initially. They were first to the ball at almost every contest with their half back line proving difficult to break through and providing plenty of rebound run.

North Beach would go into quarter time two and a bit goals down, having only scored one point after seemingly squandering our first crack with the breeze. As the quarter time huddle formed the weather only strengthened with rain beginning to spit and the wind getting stronger.

An uphill battle in the second quarter faced our Tigers boys but not one player doubted we were up to the challenge. Collegians struck first blood quickly in the second and established a formidable three-goal lead.

But this setback only spurred our boys to lift to another gear. Harry Quayle won the tap at the centre bounce and Mitch Hunt roved beautifully to send the Beach forward. Zach Farrell laid a crucial tackle deep in the forward pocket and won himself a holding the ball decision before coolly slotting the snap from the tightest of angles.

North Beach were on the board and there was no looking back. The midfield guns began to gain ascendancy at the coal face and backman Karl Sauerwein was able to shut down Collegians’ most dangerous forward and repel the next few entries.

Brendan Naylor, one of our shining lights from the first quarter, made it his mission to find us a way forward any way he could with gut busting running up and down the wing all quarter.

Things were starting to go our way and when Jacob Irwin slotted a remarkable set shot from 45m out hard against the boundary it was obvious something pretty special was in motion. A brilliant effort to win the second quarter against the breeze and go into half time only a goal down had swung the course of events.

The third quarter was all North Beach. Forward entry after forward entry was demoralising the Collegians defenders but the Tigers couldn’t quite capitalise on the scoreboard.

Champion midfielder Connor Pollard put together one of the most dominant displays of the season and had the ball on an absolute string from half time onwards. Ben Tindall’s pace and grit was too much for the Collegians forward line to contain and North Beach’s half forward line began to get off the chain.

Beach’s courageous captain Ben Hodge was able to pick off an errant kick out of Collegians backline before delivering a laser guided bullet to the chest of centre half forward James Quinn 30m out from goal.

Quinn would go back to slot it and level the scores as the massive North Beach supporter contingent went nuts on the boundary line.

Another centre clearance from Pollard honoured Lachie McLeod’s strong lead from half forward who was able to win a push in the back free kick. A bit of lip from the Collegians defender gave McLeod a set shot 20m out to put Beach in the lead for the first time all day and he made no mistake.

At three quarter time North Beach could taste victory but we were still only a goal up and would be kicking against the breeze in the last term.

A dogfight ensued in the fourth with neither side prepared to give the other an inch. North Beach key backman Blair Wilson put together one of the most masterful displays of defensive marking you will ever see, intercepting four or five long kicks inside the Beach back 50.

Jacob Della Santa showed class and skill to shrug off a would be tackler, before selling candy to another and taking a left handed bounce mid step to send Beach inside forward 50 in what was one of the highlights of the match.

The best of all would come not long after when Jacob Irwin laid an extraordinary holding the ball tackle in the forward pocket right in front of the massive contingent of North Beach supporters on the boundary. After kicking a critical goal in the second he went back and slotted the even more impossible sealer from right on the boundary 40m out.

Collegians managed one late reply with a minute to go but the damage had been done and North Beach ran down the clock until the final siren. It was an incredibly satisfying victory and one that won’t soon be forgotten by those who witnessed it.