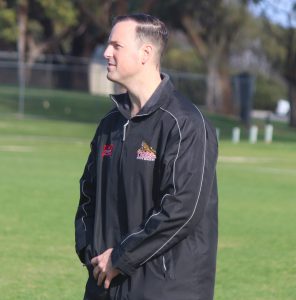 British Petroleum, or BP as we know it, used to run an advertising campaign with the tag line ‘the quiet achiever.’

The synergy between that petrol pedlar and North Beach legend Novak ‘Jesus’ Smith is undeniable.

Smith, a champion of the lower grades, surreptitiously crept to the 350-game mark on Saturday against Kingsway – a major achievement that was celebrated appropriately with a victory for his Beyond Tools E2-Grade combination.

Smith is not only the coach of this team; he is the glue, the manager, the recruiter and the central player.

In his typically under-stated fashion – he remains incognito except when wearing his dress shoes and socks with his footy shorts – Smith kicked three goals as the Beach eked out a 61-point victory 12.7 (79) to 3.0 (18).

James Bryce also chipped in with a couple of goals while Cam Alco was a powerful force through the midfield, and other solid performances came from Zane Persichitti, Drew Shepley and Paul Cavanagh.

Meanwhile, the Hybrid Linings C5-Grade maintained their unbeaten record with a gritty 15-point victory over Trinity Aquinas at Bill Grayden Reserve – 8.8 (56) to 6.5 (41).

The Beach arrived to see three massive puddles in the middle of the ground and they took a while to adjust as TA, who had set themselves for a mini grand final, were fast out of the blocks and had three goals on the board before the Beach could blink.

Slowly, the Beach began to acclimatise to the conditions, found their groove and started to dominate time in possession.

With a few tweaks and greater reward for control, the Beach turned a point to the good at half-time.   Leading the revival was Michael Schofield in the ruck who was completely dominant and gave Alex Thompson, Jamie Bennett and club debutant Kade McKenzie, first use of the footy.

The outside run was provided by Nathan Torre and Brayden Quinn and between them all they continued to pump the ball forward. Up forward Mason Rollo was dangerous and finished with three goals but it was Matt Seaton, playing as a defensive half-forward, who was instrumental in getting the Beach back in to the contest.

Down back, Jack O’Gorman was constantly repelling TA’s forward forays as he intercepted in the air while Luke Hopkins, Riley Hinkley, Ben Litchfield, Shane Duckworth, Matt Holden and captain Aran O’Connell kept the Boomers to just two goals in the last three quarters.

The Beast Carpet Cleaning C5-Reserves also faced one of their most testing matches of the season and emerged victorious, knuckling down after a tight first half, taking it up a notch and Trinity Aquinas could not stay with them.

Josh Cameron was dangerous up forward and kicked four goals, finishing off the work of captain Joel Brown, David Purser and Liam Hunter while hard nuts like Trevor Lang, Liam Vardy and ruckman Ryan Clapham were important as the Beach imposed their will on the contest.

The GJ Osplumb E3-Grade were involved in an engrossing battle with Gosnells at Charles Riley Reserve (2), but could not get the job done despite a spirited effort.