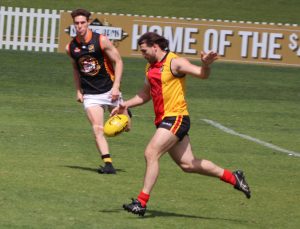 Jarrod Chapman was a pillar down back.

There is never a good way for a winning streak to hit the skids. And most often it is not anticipated.

As Scott Holbrook and the Lifenet A-Reserves targeted a fifth successive premiership there was a degree of confidence they could get the job done, particularly in the knowledge that they had been 10-goal victors over Curtin University-Wesley a couple of weeks earlier.

But Holbrook knew it was not a done deal; that winning every game on the way to the Grand Final accounted for little and that it would come down to the day.

He was acutely aware that 12 months earlier the roles were reversed, with North Beach going in as overwhelming under-dogs and then coming away with the flag. He steeled his players in the need to play at their best and that Wesley would be a dangerous foe.

As it transpired the Beach found it difficult to play at their optimum, losing in a similar fashion to the O’Rourke Realty A-Grade a week earlier in the preliminary final against Kingsway. They owned the territory battle for most of the game, held their opponents scoreless for half of it, but simply could not hit the scoreboard themselves.

The backline was sublime, but transition into the attacking 50 was sloppy and connection with the forwards non-existent. The result was a heart-breaking loss, 4.3 (27) to 3.5 (23).

The backlines of both teams were on top, with the Beach defensive effort led resolutely by the experienced heads of Ben Sweeny and Jarrod Chapman while Matt Raynor, Jack Merson and Jackson Martino also stood up. 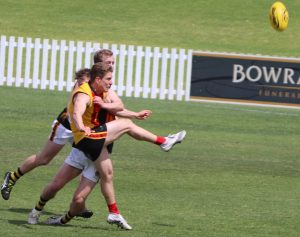 Through the midfield, wingman Tim Edwards was exceptional working hard both ways while Josh Stott had his moments on the wing and later in the ruck as Holbrook tried to generate some match winning run.

Ruckman Josh Chapman also worked hard and was influential, especially in the early part, while Ben Johnson worked hard in the forward line and Nathan Adler kicked two of his team’s three goals.

Shannon Lucassen and James Canty provided run and spark, but it was a day when things just did not get going. And having failed to capitalise on the share of the ball they owned the door was ajar at three-quarter time.

The Beach had led all day and were 10 points in front at the last change, but Wesley-Curtin were kicking with the aid of a significant breeze. They kicked three of their four goals in the final quarter and the Beach could not find a way through.

Significantly, the Curtin-Wesley A-Grade team, also strong winners in the qualifying and second semi-finals also looked flat in the grand final as Kingsway won for the first time in their history.