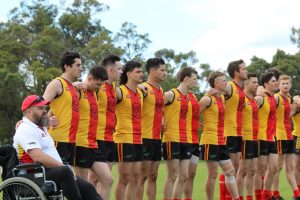 As if winning a premiership was not motivation enough.

As the Hybrid Linings C5-Grade lined up for the national anthem ahead of their grand final showdown, they could have glanced down their line of teammates to the end of the queue. There, in his wheelchair, sat Glen Hinkley.

The man who has coached this team for the last six years has had a particularly testing time in the last six weeks. Scans after a seemingly innocuous tumble at training revealed a more sinister issue, requiring surgical intervention to a hip problem.

He was unable to coach for a number of weeks, calling on club legend Bill Duckworth to fill the void, and this was his return game. Duckworth, who took the thirds to consecutive grand finals in 2014-15 after his decorated A-Grade career, was there in support as the club’s third grade outfit chased an elusive flag.

The challenge for the lower grades, which complicates the matter of converting opportunities during a finals series, is that the opposition can sometimes appear like chameleons.

They may wear the same colours, but the faces can change markedly as players move up and down according to the fortunes of their more senior teams.

But the consistency of the Hybrid Linings C5-Grade remained true and culminated with an emotional and precious flag.

For the last eight years they have been in contention and it was not until last Saturday that Hinkley and his charges broke through for a well-deserved premiership courtesy of a 25-point victory over Trinity Aquinas – winning 10.6 (66) to 6.5 (41).

From the first bounce down, the midfields of both North Beach and Trinity Aquinas went head to head and the intensity and physicality did not waiver for the four quarters.

The difference being the capacity of the Beach midfield being able to step up a gear at vital stages and take control of the game.

The backline was superb, again allowing the opposition to score just six goals for the game. Matt Holden was dominant across half back in the first half until getting concussed while taking a courageous mark running back with the flight of the ball. Shane Duckworth and Riley Hinkley were too good for the TA key forwards while Matt Seaton mopped up everything at ground level.

Up forward, the Cameron brothers almost outscored TA themselves with five goals between them while Jordan Brooks and Nathan Torre worked hard for four quarters to provide targets.

However, it was the North Beach engine room that ultimately determined the result. Tom De Courtenay was magnificent in the ruck and was the best big man on the ground. His ruckwork gave Matt Irvine and Nick Marsh the opportunity to set up attacking forays while Jayden Black and Alex Thomson won clearances all over the ground with their insatiable appetite for the hard ball.

The wide open spaces of Gosnells Oval complemented the running capacity of the classy Nic Wells, who won best on ground honours, Brayden Quinn and the ever-inspiring captain, Craig Hall.