Relatively speaking Marcus Sarich is one of the newcomers to the North Beach family.

But it hasn’t taken him long to become part of the fabric of the club, initially sponsoring our Brett Jones Colts team through Red Hill Auditorium for several years and more recently stepping up to  platinum level with the Indian Ocean Hotel.

Unfortunately, pubs and restaurants were hard hit by the government-imposed restrictions implemented to blunt the effects of COVID-19.

But Marcus and his staff are ready to roll at the Indian Ocean Hotel – albeit at restricted capacity for the time being. The good news for IOH and other Perth bars and restaurants was the reduction of limitations around the number of people at any venue, from 4sqm per person to 2sqm.

For a lot of businesses in the hospitality industry it was not viable to open the doors until the phase3 announcement last Friday. While Marcus and his crew might not have been able to serve their customers with their favourite ale, the have been far from idol in the last three months.

They have given the Indian Ocean Hotel some additional love and attention, ready for this moment.

Marcus was introduced to the club by Ian “Scratcher” Halley, a member of the 1989 and 1990 premiership teams and a stalwart at the Beach.

He followed his father into the North Beach playing ranks and now his son, Ned, who has played in a couple of successful teams as well – although he is still striving for a senior flag.

Next week capacity levels lift and it’s a great opportunity for the club faithful to support a loyal sponsor who has helped to create what we all enjoy. 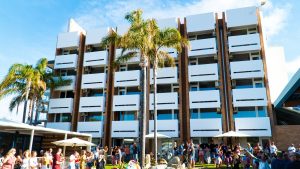