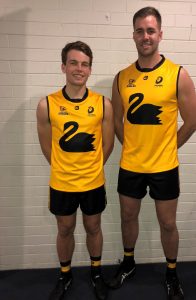 Sam Lamont (left) and Kyle Cranley have earned the right to wear the black swan.

Two accomplished North Beach players might not have responsibilities with the O’Rourke Realty A-Grade team this week, but they will not be absolved of all football tasks.

Both have been rewarded for outstanding form are deserving of their opportunity to pull on the State guernsey.

Cranley has been an imposing presence all season, carrying much of the big man burden, and has excelled both in the ruck and as key forward. A tough and adroit competitor he knows nothing less than to play at full tilt and is sure to give a bold showing.

Lamont, a favourite son of the North Beach faithful, has been a part of the West Coast Eagles WAFL squad this season and has played the Tigers when not required at the higher level.

He, too, knows only one way to play,  and will be hoping to contribute at such a level as to cause an upset over the highly-rated Victorian team.