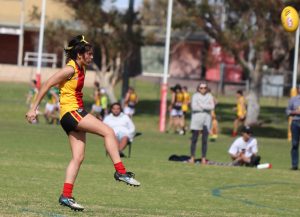 Anyone who plays – or has played – sport would consider there to be just two key performance indicators.

The first is the scoreboard, the second is the ladder.

While both were at the forefront of the mind when the Project Ceilings A-Grade women tackled West Coast at Charles Riley Reserve last Saturday, they were secondary in the bigger picture.

It was possible, albeit highly unlikely, that North Beach could elevate into the top four in what was the last qualifying round of the season, by upsetting the third-placed Coasters. Everything had to go right.

North Beach needed to win and fourth placed University had to lose to ladder leader Curtin University-Wesley. That was possible, but the degree of difficulty was off the charts with a 60 percent differential between the Beach and the Scholars.

In reality it was more about how they played, than the result itself.

For the record, West Coast endured 6.8 (44) to 3.12 (30), but North Beach was brave and not without opportunity. They lost on the scoreboard and finished fifth on the ladder, but in terms of development they are improving.

And so is the competition. In the three years of women’s football at this level, the trajectory has been exponential to such an extent that the saying ‘if you’re not getting better, you’re going backwards’ could not be more apt.

Despite the loss, it was a strong finish to a mixed, yet positive season. The Beach girls made a pact to make the running and not allow West Coast to get away early.

It was a scrappy affair, as nerves dictated play, but halfway through the final quarter the Beach were only five points down. There were some lost opportunities, but the endeavour was unquestioned.

Ashleigh Pianto was outstanding through the midfield and deserved best afield billing, while captain Stephanie Ball showed true grit and demonstrated why she is admired by her teammates, while Emily Sainty dominated the ruck and the steady Tessa Anderson and Olivia Hongell delivered dedicated and skilful footy all day.

The back line was resolute and did all they could to hold back West Coast’s forward movement.

For the Peak Body Fitness C3-Grade women it was another tough day scrambling for numbers, but they were brave and had a crack, despite being low on numbers.

The Hybrid Linings C5-Grade found it similarly punishing against University at McGillivray Oval, but doubtless will work on ways to respond this week, while the Coast to Coast Imports C5-Reserves were also out-pointed by the Scholars.

While the day did not end as well as the Beach faithful had hoped, it made a bright start through the Indian Ocean Hotel Brett Jones Colts.