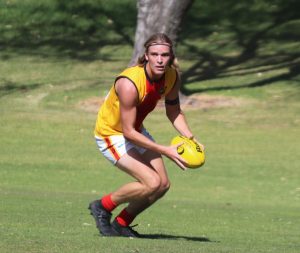 Football is a results-driven activity, regardless of the level, but sometimes it is possible to take more than a few positives from a defeat. Certainly, there is often more to learn.

That was the situation when the O’Rourke Realty A-Grade lost to Scarborough at Millington Reserve last Saturday.

While victory was the target, an 11-point defeat did bring with it some reasons for optimism after falling short against the reigning premier in an entertaining encounter on the Sea Eagles home deck.

The Beach responded several times in this clash and had opportunities in the final quarter to snatch an important win, but failed to capitalise on the openings. After Scarborough kicked the first two goals of the game, the Beach responded and led at one stage.

Then, after Scarborough had surged to a 21-point advantage in the third term, North Beach showed great tenacity and resilience to remain in the match before losing 9.10 (64) to 8.5 (53).

While it marked the club’s first loss of the season, against a club likely to again be a competition benchmark, there were several key players sidelined and a couple of injuries in-game that required structural adjustments.

As expected in a domination of that extent, the Beach had winners all over the ground, set up by a midfield unit that controlled the game. That advantage was created by the ball-winning capacity of players like Nick Bowe, Dan Ryan, Josh Stott, Tim Edwards and Arran Goddard-Nash, while Nathan Adler was a reliable focal point up forward, celebrating his birthday with a six-goal bag.

Ruckman-forward Michael Schofield was also an imposing presence, while Sean Foley was under notice throughout and Andrew McGuinness showed his class, his delivery inside the attacking 50 metre arc a feature.

The Plasterwise Phil Scott Colts let an opportunity slip when they were forced to settle for a draw with the Sea Eagles, leaving too much work to do in the last quarter that resulted in scores being locked at 4.7 apiece at full time.

Despite the efforts of Conor Boylan, who willed himself into the game in the final term, forward Noah Cahill as well as the likes of Jack Merson, Jamie Bennett and Luke Hopkins, the Beach made a desperate surge for victory but could not generate the deadlock-breaking score.

The last quarter was played for the most part in the North Beach half, but they could not get maximum reward for control.

The Indi Bar Brett Jones Colts went into round four buoyed by a strong win the week before and hoped to make it two on the trot against Trinity-Aquinas.

They enjoyed being back at Charles Riley Reserve and responded a strong five-goal first quarter to set the tone early. Trinity Aquinas came back hard in the second but the North Beach defence, led by strong performances from Matthew Paddick and Connor Hingston, soaked up everything TAs could throw at them.

TAs only managed one goal as the North Beach midfield dominated around the ball once more. Flynn Rose had a field day on the wing and Connor Pollard continued to show his willingness to put his body on the line.

In the end the Beach ran out 58 point winners.

Jay Allison-Green, David Gelle, James Bryce and Ryan Staniforth were prime movers for the Beach along with Tjaard Tait, while Brayden Bowden capitalised on a steady flow of opportunities to kick six goals.

Scarborough did sit above the Beach on the ladder, but the Novak Smith-coached outfit now sits in fifth position with an even split of wins and losses after four rounds.

Despite a tough start to the season they have persisted under the direction of Will Hooper and reaped well-deserved rewards.

Paul Nathan was a star up forward, Cam Howie enjoyed his first hit out in 18months, while Michael Dodd and Kim Thompson maintained the standards they have set in the opening month of the season.

Michael Humphrey was outstanding while James Winterton, aka the Gary Ablett of the 6s, was lively throughout.