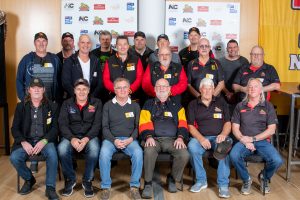 Some of the North Beach royalty at Charles Riley Reserve last Saturday – the assembled life members.

The North Beach faithful had been waiting months for the opportunity and finally it came.

The first home game for the O’Rourke Realty A-Grade team in this truncated Perth Football League season was an opportunity to connect with the club’s faithful. And they availed themselves in strong numbers.

An additional incentive was the gathering of four premiership teams who were celebrating significant anniversaries, the 1980 (F-Grade), 1990 (A-Grade) and 2010 (A-Grade and A-Reserves) assembled to reminisce about reaching their football pinnacle.

North Beach royalty was in the room and while the current climate did not allow them to rub shoulders with each other they enjoyed the conviviality and the opportunity to sip on a frosty Carlton Draft.

As well as premiership players from those four teams, the club also invited its life members to the occasion meaning that it really was a conglomerate of some of those most influential and revered figures in club history.