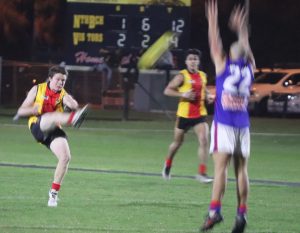 In an entertaining encounter, in front of a large and enthusiastic crowd, the Beach endured 6.9 (45) to 5.9 (39) after David Purser kicked a deadlock-breaker with two minutes to play in the final term.

Kingsley, who went into the contest winless, produced a spirited performance and threatened to upset the hosts until the Beach found a way to break through.

The game-changing move, after Kingsley had controlled the game in the second and third quarters, came when Judd Clinch was thrust into the ruck. He won a number of contests at stoppages but also had a decisive impact around the ground.

Travis Burton put his head over the ball at crucial times – not without consequence in the second term when he came off the ground with a towel to a nose that dripping claret.

Jackson Martino was solid across half-back, Purser’s two goals at either of the game were crucial in a low-scoring arm wrestle, while Callum Corbett and Stratton Sragant were also influential.

The game created a pulsating climax, but could easily have been locked away in the first term when the Beach squandered a number of gilt-edged opportunities in front of goal. They kicked six points before Purser converted on the run deep into the first term.

Ben Wasley provided a strong target up forward, but failed to reap the deserved return on the scoreboard after taking some outstanding grabs.