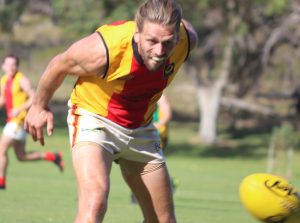 Michael Schofield…has earned a promotion back to A-Grade

The Perth Football League season is on the cusp of just the third round, but already the O’Rourke Realty A-Grade team faces a litmus test against another undefeated team, Fremantle CBC.

The Beach has been comprehensive winners against both Trinity Aquinas and Collegians, but with due respect to those worthy opponents, CBC will be next level.

They have not lost either and boast an abundance of talent and usually are even tougher to beat at Morris Buzacott Reserve.

Generally they are strong through the grades and that has been the indication in the opening fortnight, although the same could be said of the Beach.

Again the Beach will put on show some of its young talent with Madoc Plane and Luke Hopkins earning promotion, while Adam Swain and Michael Schofield have been rewarded for solid form in the reserves.

The Lifenet A-Reserves North Beach outfit sits atop the ladder and will confront a Fremantle CBC outfit that has already dropped a game while the Plasterwise Phil Scott Colts and CBC have split their results in the opening two rounds.

While the A-Grade teams travel down the highway to Morris Buzzacott Reserve, there will be plenty of action at Charles Riley Reserve with the Hybrid Linings C5-Grade, Coast to Coast Imports C5-Reserves and Indian Ocean Hotel Brett Jones Colts hosting CBC.

The Beyond Tools C4-Grade and GJ Osplumb C4-Reserves will both play Bayswater on the northern oval, with the Grange Residential Integrated team opening proceedings against Willetton at 11.25am.

The Project Ceilings A-Grade women and the Peak Body Fitness C3-Grade women will both travel to Warnbro for a challenging toad trip.